Building and maintaining relationships between companies and customers, known as customer rapport is one of the most important factors in order to stay long in business. This research investigated the customer rapport strategy used by Nintendo to build and maintain their relationships with gamers. As one of the oldest gaming console companies, Nintendo has a long track record of keeping and maintaining gamers, from the first generation of consoles until the current eighth generations. This relationship is maintained by the use of a nostalgia strategy, by re-releasing classic games and consoles, and launching familiar characters in new games and media. This nostalgia strategy has kept Nintendo in the industry as a platform owner of first party developer.

This research investigates gamers’ views about this nostalgia strategy by using two forms of qualitative data, netnography following Kozinets (2002) and interview. The observation of netnography collected data from Reddit forums was used to form an understanding of the type of customer rapport strategies that Nintendo employed and the impact of these strategies toward brand attachment and loyalty. To verify and triangulate this netnography observations, fifteen interviews were conducted with gamers. In both cases, a method of the thematic data analysis was employed.

Overview of the Gaming Industry

The video game industry has been around for almost 50 years now, if it is measured by the first released of Spacewar! in 1962. Though it was not until the 1970s that the first video games console released in the market. During this half century, video games transformed from being a technological magic created by hackers to an electronic novelty to a popular toy. Nowadays it has become part of people’s lives, a psychological experimentation, a therapy and many more (Wolf, 2012).

Based on global gaming market report of Newzoo year 2016, The gaming industry is one of the fastest growing industry worldwide (McDonald, 2016). In 2016, it generated a total of $70.4 billion, growing at 17% on a year-on-year basis. This revenue growth was supported by a stronger performance from the top 10 gaming companies who contribute 54% if the total global games market in 2015. With these 10 companies still growing, the gaming industry will definitely still in a growth momentum.

The game revenue data above combines the whole game industry from mobile, console, and PC games both games’ producers of hardware (consoles) and software (video games).  NetEase was the most growing company with 50% revenue growth due to its mobile performance in China. On the second place for the highest revenue growth is Activision Blizzard with 42% because of the acquisition of King, producer of Candy Crush. With the growth of mobile game the console market is trying to still make a growth momentum by releasing new hardware consoles. Both Sony and Microsoft are still in the growing momentum due to the launch of Xbox One and PlayStation 4. Unfortunately, Nintendo was the only company in the top 10 whose revenues declined by 6%.

When it comes to gamers, based on Essential Facts 2017 report (Essential Facts: About the computer and video game industry, 2017), gamers pay more attention the quality of graphics. This has been driven by the release of same game on different consoles which lead gamers to be able to compare the graphic support on different consoles. This fact knowledge is a reflection of PlayStation 4 compare to Xbox One games (Daws, 2017). The PlayStation 4 has over a thousand games with 100 of them are exclusives while Xbox One has eight hundred seventy-six games with only thirty are exclusives (Swider and Porter, 2017). This fact somehow shows how some of game titles available for both consoles. 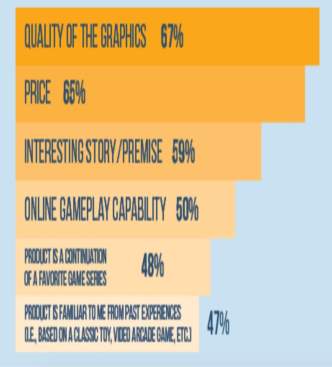 Figure 2 above shows factors that influence gamers’ decision-making process in making a purchase, from graphics, price, story, and games’ content. Based on the figure 2 above only 48 percent of customers want a continuation of favourite game series and 47% look for a familiar product from their past experience. This is the factor where Nintendo plays, but based on this data it becomes less important than graphics. Since this paper, is focusing on Nintendo’s approaches, the next section of this paper will focus more on Nintendo’s position in the gaming industry.

The release of the new Nintendo 3DS handheld console seemed lacking in comparison the consoles of Sony Playstation and Microsoft Xbox One, which were launched in November 2013. Despite always being the winning console for Nintendo, the 3DS would apparently depend on the re-release of Nintendo’s iconic video games. Figure 2 shows that despite the Nintendo 3DS comes third, it only managed to gain 8% of market share compared to 51% share of Sony Playstation 4 and 26% held by Microsoft Xbox. 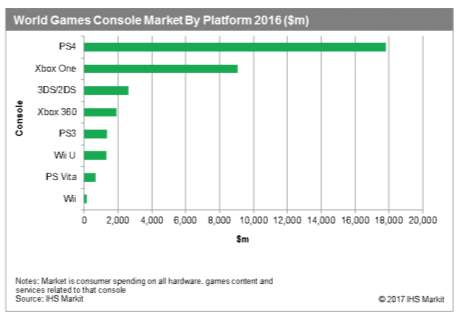 The same weakening condition found when looked at the performance of Nintendo’s digital games on console. Games available on Nintendo’s consoles were only able to achieve 5% share of digital games content for year 2016 as shown in figure 4, due to lack of new full games and paid downloadable content releases (Technology.ihs.com, 2017). It could be concluded as not a very good year for Nintendo. 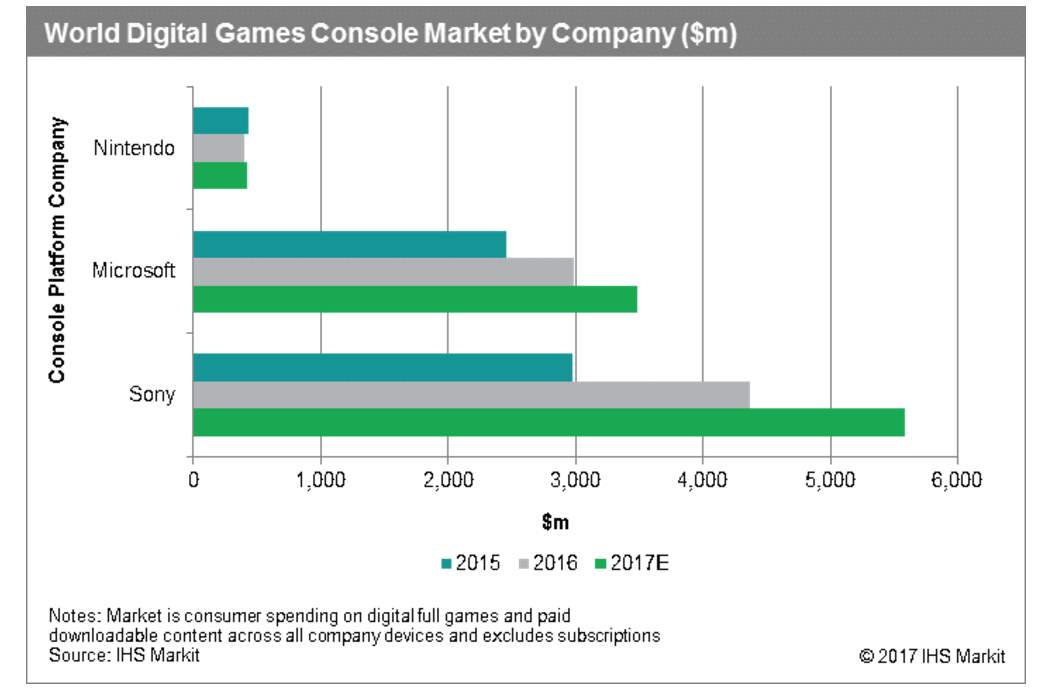 In November 2016, Nintendo launched the new and compact Nintendo Entertainment System, which is a smaller size version of the 1985 original. It offers 30 games, including classic games like Super Mario Bros, Zelda, and Punch Out. This hardware includes one controller and an HDMI port. The retail price is around $60 in stores, but online price is around $130 and up. This release is part of Nintendo’s nostalgia strategy by recycling the classic games in order to keep the customer rapport (Sawers, 2016).

Aside from recycling the classic games, the nostalgic strategy was also reflected in their new products launched. Some of the company’s intellectual property still managed to find new stories for its iconic franchise in each hardware console launched (Heater, 2017). This includes the re-launch of their classic games like Legend of Zelda, Mario Bros, Fire Emblem and many more.

Nintendo Switch is also part of their nostalgia strategy. It tries to bring back the memory of Nintendo Gameboy. It is a recently released console that gained good responses from the Nintendo’s fans. With several iconic Nintendo’s characters to be featured on this new console, it has a potential for Nintendo to improve its market share performance. Another example of combining past and present is that of ‘Pokémon GO’. The game was able to connect the experience of past memories of catching iconic Pokemon with today technology of augmented reality. While this was not fully a Nintendo’s product, it fits well with Nintendo’s nostalgia strategy.

A nostalgia strategy in marketing is not something new for companies. This strategy was used by many companies in order to make their brand more persuasive, compelling and effective (Baker and Kennedy, 1994; Muehling and Sprott, 2004; Pascal et al., 2002). Nostalgia was experienced as a personal sensation, it is when a person remembers a particular moment or a product during a particular time in the past and reacts emotionally when the same moment or product appears again. This nostalgia effect is mostly found on the entertainment industry. Customers prefer to listen to the same music that they listened to when they were young (Holbrook and Schindler,1989), interested with movies stars and films in their youth (Holbrook and Schindler, 1996).

Nostalgia makes them feel secured and comfortable. Nostalgia connects the customers with their best memories from their past. For marketers, nostalgia has become one of the devices that could help in highlighting the brand when compare to its competition, and can help to make a connection with the customers (Arizona, 2016). This connection or relationship is the one that transforms into customer rapport.

New technologies do not only allow companies to remaster their content but also remonetize content.  The company will be able to resell their products to a new audience especially to the parents who wish their children to have the same experience as they did. For example, Disney’s Rogue One: A Star Wars Story, which is part of the Star Wars franchise and had earnings estimated at nearly $300 million after its weekend release where parents are familiar with the story and characters and children were intrigued by the new story (Everett-Haynes-Arizona, 2016).

Outside of the entertainment industries, several other industries such as the mobile phone industry and the automobile industry may also employ nostalgia, for example, Nokia with the re-launched of Nokia 3310, Volkswagen re-launched the beetle, or FIAT with the 500. Other examples from the gaming industry other than Nintendo is the RetroEngine Sigma plug-and-play console, which can play games originally released decades ago on Atari VCS, Sega Genesis, and NES, among others (Everett-Haynes-Arizona, 2016).

Despite the many approaches of maintaining and building customer rapport, Nintendo apparently chooses to use a nostalgia strategy. An amusing illustration of this is when in one episode of The Big Bang Theory (The Big Bang Theory: The Indecision Amalgamation – Season 7 Episode 19, 2014), Sheldon Cooper, one of the character, asked for a quick poll of Xbox One or PlayStation 4, when one of the other character, Bernadette mentioned Nintendo Wii, it attracted mockery at her, where the other character called her a grandma. This snippet of episode shows how Nintendo is well known for its nostalgia which could mean it is only for older people.

Thus, in this paper, we are trying to find effective approaches that can be used by Nintendo to maintain and build its customer rapport by evaluating its existing strategy, comparing its stand against competitors. This will be achieved by investigating on the nostalgia strategy that has been used and its effect on the customers, in this case, gamers and if any better strategies appeared that can be used to effectively build and maintain the customer rapport.

The aim of this research is to find effective approaches that can be used by Nintendo to build and maintain its customer rapport, that lead into brand attachment and loyalty.  This research follows an investigative and explorative method in understanding gamers’ brand loyalty towards heritage and the famous brands of Nintendo’s video games. The research will show the usage of nostalgia strategy in gaming industry particularly used by Nintendo and its effect towards the brands and company from gamers’ point of view.  Moreover, to understand if this approach is effective enough to build and maintain the customer rapport.

In order to reach the final goal of this research, there are three main objectives as follows:

1.1 Research Background and Motivations Throughout the history of cosmetics (Appendice B), substances of all sort were utilised to produce products to enhance beauty and social lives, however with tim...

Effect of Branding on the Consumer Purchase Decision

The primary goal of this research is to display branding value, functions and most important thing, its part in the consumer buying decision....