Business Process Reengineering was an idea put forward by Michael Hammer, father of reengineering, in the late 1990’s when he published his article “Reengineering work: don’t automate, obliterate” at the Harvard Business Review. The improved results from the article were crucial for many companies that BPR became a trend in 1994. Success stories like ‘Ford cuts account payable headcount by 75%’, ‘Mutual Benefit Life improves insurance underwriting efficiency by 40%’, ‘Xerox redesigns its order fulfillment process and improves service levels by 75% to 97% and cycle times by 70% with inventory savings of $500 million’, ‘Detroit Edison reduces payment cycles for work orders by 80%’ encouraged many companies to utilize the reengineering to attain their own heights. (Hammer, 1990)

Organisations are no longer able to cope with the conventional management mechanisms to get their client’s 100% satisfaction. Due to the increase in number of customers, the level of competition and changes, organisations are currently in such an intense environment with very high demand where mass productivity and high quality of service with lesser turnaround time are required. In this situation, the organisations cannot totally rely on IT alone to meet its business goal. Hence, they need to look deeply into their core business process to meet changes needed. So basically, what BPR is meant for is to redesign the business processes, especially the one which helps in developing the value of the business. With BPR, organisations can analyse the basic business processes and systems, restructure them periodically so that they can be flexible for any kind of future design.

Various authors had their own definitions for reengineering. Petrozzo and Stepper (1994) pointed out BPR is a combination of redesigning the processes, organisation and the IT support which in lead helps the company to attain drastic improvement in time, quality, customer satisfaction, cost and services. Whereas Lowenthal (1994) explains the fundamental rethinking and redesign of the business processes and organisational structure, mainly focused on organisations ability to achieve dramatic improvements in business performance, as BPR’s most essential constituents. Hammer and Champy in 1993 explained that with radical improvements sought more a function of organisational process redesign, rather than IT implementation (Hammer and Champy, 1993). Many other authors have pointed out that reengineering can be performed at different levels in an organisation. For example, IBM improved their costs; time and quality by a large percentage by reengineering their finance process, but had very little effect on overall performance of the company. The three types of companies that undertake reengineering as identified by Hammer and Champy (1993) are:

Even though are various definitions of BPR, the main goal of BPR is the radical improvement of the processes. However, there are no particularly assigned tools and techniques being used in Business Process Reengineering. This is because authors and various BPR consultants have pursued the use of many different tools and techniques for the best result. Some of the tools and techniques commonly used are as follows.

Hence from one point of view, BPR incorporates a range of activities concerned with the improvement of processes. Whereas some authors suggest that the key to success is in understanding and developing a BPR strategy. From all the studies till date, the success for a company can be scaled on how good the senior management supports BPR. (Gadd and Oakland, 1996; Barrett, 1994)

Whereas in BPR, the companies adopting it do not concentrate just on the customer satisfaction, but will consider all the necessary changes needed to be made to the processes. Many authors like Klein (1993) Suggested that BPR is more radical than TQM for a company. But some others especially Harrison and Pratt (1992) suggested that an integrated strategic management using BPR and TQM within the organisation will be more effective. Davenport (1993c) points out that, a process analysis must be conducted to identify the processes to be reengineered and which one is to be managed on basis of continuous improvement.

Continues improvement of processes is considered as the only link to TQM by many authors and researchers. Whereas when we consider other aspects of managing processes, following are considered important in both TQM and BPR equally:

Various research shows that BPR is less likely to be successful outside TQM. This is because it uses the methods, process and customer orientation of TQM to deliver step changes. But according to the authors Zairi and Sinclair, on their study of UK organisations, very slight difference exists between organisations using TQM and organisations not using TQM and integration with BPR successfully.

From the studies, we can say that most of the authors agree that if BPR helps in focusing attention on transformational change, with-out affecting the core competencies and continuous improvement, it can effectively contribute to a complete quality framework that will be fruitful for the entire organisation. Considering this fact, Gadd and Oakland (1996) concluded that TQM and BPR can be distinguished as two different approaches capable of coexisting in the same organisation, but used at different periods to get a result of different performance improvement levels.

To understand BPR and its application in an organisation, it is very important to understand the entire system and the processes and how the processes fit into the organisational system. Information Technology has the capability of providing facility to achieve breakthrough performances in organisational systems. The study conducted by Hammer (1990) at Ford and by Davenport and Short (1990) at Xerox shows that a radical redesign of processes concerned was involved. The report by Cranswick (1994) says about many Australian companies that have undergone similar radical redesigns. Some examples are listed below:

The study clearly shows that the reengineering was not very effective as expected by the organisations. The organisations studied fell short of certain goals that were set by the corporation.

Figure 1: Goals set by corporation in the study

This study shows that the participants had failed to attain the benchmarks set by the corporation by as much as 30%. Chapman (1995) concluded that a properly and completely reengineered organization is yet to be identified since they are very rare.

The reason was identified by Champy in his study. The top management of the companies was excited about the proposed reengineered results for the companies like 20% increment in customer retention rate, 50% decrement in production time and 30% less administrative costs. But the problem identified was that, the top management of the organization was not very willing to give up the control over the functional area and collaborate with the reengineering team. This resulted in the failure of reengineering efforts in a year after its inception.

Day (1994) points out the three different principles that must be understood by the senior management before initiating BPR. 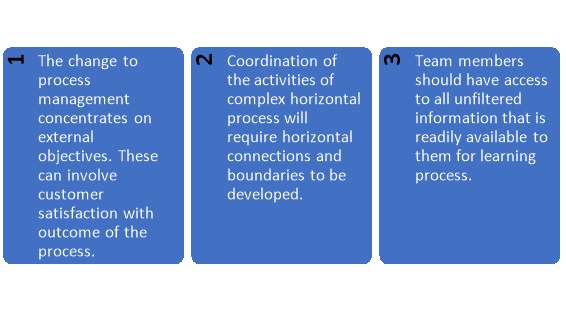 Schaffer and Thomson (1992) pointed out in their publication that how focusing on results rather than just the process/activities in BPR makes drastic difference between success and failure for the company. They suggested that at every level of BPR, focusing on end results gives a direction and measurability. Benchmarking is one of the most powerful tools in BPR. The account payable process by ford is a main example which can be considered here when we talk about benchmarking. The whole idea of benchmarking doesn’t mean copying what it’s done in another company. It is all about identifying the goals and executing it by redesigning the processes accordingly.

The company should focus on establishing their core process by identifying what it does, how it does, and how it should do. Strategic competitive advantage can be attained by redesigning the core processes accordingly to get the most required output. The key element in this process is visioning the outcome. (Goss et al., 1993)

The Process of Redesigning

According to Earl and Khan, 1994, most of the BPR efforts take the form of a project. Numerous methodologies are proposed which will have a common element. Project happens in several stages like all the other projects. The main objective is to asses, reengineer and support all the key processes that contribute to customer satisfaction and corporate goals, and the people needs to be equipped with all the appropriate technologies for that. Hence we can say that BPR implementation can involve substantial investment (Petrozzo and Stepper, 1994), but they also require considerable top management support and commitment. The most critical element of reengineering is the formation of the reengineering team for the organisation. From various studies, many suggest that the team should have the following:

This can vary according to authors. Harrington (1991b) referred to executive improvement teams and process improvement teams instead of steering committees and reengineering teams. Hammer and Champy in their study in 1993 stated that the sponsor, process owner and leader may be one or more person depending on scope of reengineering effort.

Most of the authors suggest that, once the process redesigning has been done, continuous improvement of the new process by the employees working in the process. This basically means organising the work among the people in such a way that it fosters interaction, understanding and responsibility.

There are two major risks involved in the implementing of BPR as identified by Carr and Johansson (1995). They are:

From the study conducted by Carr and Johansson, the identified that only 44% of organisations that participated in their survey they are willing to accept a small amount of risk while implementing BPR. While 37% of the organisations that participated reported that communication with employees as a key factor to minimise any kind of risks during the implementation. The message to the employees should be simple to understand, as early as possible and should involve all the top-level management so that the understanding can be attained before the start of the project. Carr and Johansson also suggested that through implementation of precisely targeted pilot programmes can help in BPR being successful.

Hammer, M., 1991. Why we need both continuous and discontinuous improvement. Perspectives on the Management of Information Technology 8 (1), 6–7.

This literature review has been written by a student and is published as an example. See our guide on How to Write a Dissertation Literature Review for guidance on writing your own.

Engineering is the application of scientific principles and mathematics to designing and building of structures, such as bridges or buildings, roads, machines etc. and includes a range of specialised fields.

ABSTRACT Need modification With the increased emphasis on both reliability and multifunctionality in the aerospace industry, active materials are fast becoming an enabling technology capturing the at...

Emission Control of a Diesel Engine using Reducing Agent Abstract In today’s vehicle application, SCR ammonia dosing is completed using complex technology and that need to be simplified for the i...

Introduction Takata is a Japanese based airbag systems supplier company (Helmold et al., 2017). An airbag is a safety device in vehicles which consists of a fabric cushion which opens up immediately w...