1.3 Interaction between hydraulic fracture and the natural interface

Figure 1 Schematic of a hydraulic fracture approaching a natural interface (H. Gu, 2012) and the slippage zone.

Figure 2 Potential interaction mechanisms between a hydraulic fracture and the natural interface.

Hydraulic fracturing has become an indispensable technique for the development of unconventional oil and gas reservoirs. The drilling technique was first introduced in 1947 with the process becoming commercial by 1950 (King, 2012). Hydraulic fracturing, a common part of the well completion process, is used to stimulate unconventional resources such as shale oil and tight gas. Production of oil and gas from unconventional wells has become a more prominent source of energy due to the rapid decline in production from conventional resources over the past two decades (Sarmadivaleh, 2012).

Hydraulic fracturing has a broad range of applications. Some of these include; disposal of waste during the drilling process (i.e. Drilling cuttings), geothermal energy extraction, fault reactivation in mining and the measurement of in situ stresses (J. Adachi, 2007). When a reservoir formation is hydraulically fractured, this creates a fracture network. It is important to ensure that the fracture propagation does not exceed the reservoir interval, such as the cap rock. The propagation pathway of the fracture can be significantly affected by the presence of a natural fracture, and can be both beneficial or detrimental (Hassan Fatahi, 2017). Shale formations commonly contain pre-existing natural fractures, and when a natural fracture interacts with an induced hydraulic fracture, this causes a complex fracture network (H. Gu, 2012). Hence, it is important to gain a thorough understanding of the effects of the hydraulic fracturing process. This is discussed in further detail in the following sections.

This thesis examines the interaction mechanisms mentioned above with the objective to understand the effects of how a hydraulic fracture interacts with a naturally fractured reservoir. It also aims to present an analytical method to predict the propagation pathway the hydraulic fracture will take, upon interacting with the natural interface. The relevant numerical and experimental lab tests will also be outlined to validate the analytical model.

Chapter one aims to briefly outline the hydraulic fracturing process, followed by the interaction mechanisms involved. The objectives of this research and the significance of this study are then proposed and lastly the structure of this thesis is summarised.

Hydraulic fracturing is a method of reservoir stimulation used to enhance the oil and gas recovery from unconventional wells to a profitable amount. This technique is most commonly used in tight gas, shale gas and coal seam gas (CSG) reservoirs, where a low matrix permeability prohibits commercial production of gas. The process of hydraulic fracturing begins with perforating the casing using perforating guns. This creates ‘finger-like’ holes in the formation for the fracturing fluid to enter through as well as they provide access for the natural gas to enter the wellbore. The viscous fracturing fluid is referred to as a ‘pad’ and is pumped into the wellbore at a constant flow rate (Taleghani, 2009).

Following this, a slurry is injected into the wellbore at several stages. The slurry is comprised of mainly water, with some proppants such as sorted sand, and a small amount of chemical additives. The sand particles remain between the pores of the formation once the fracturing fluid is removed. The purpose of the sand is to ensure the induced fractures remain open once the pressure is reduced to enable the production of oil and gas through a conductive path.

At this point, the slurry breaks down to a lower viscosity and is easily returned to the wellbore, creating a highly conductive path for the oil and gas to travel through resulting in an enhanced recovery. A plug is then set and new perforations are made at the next interval of the casing (Taleghani, 2009). For each new interval, a different concentration of proppant is used, with the last stage generally containing the highest concentration (Sarmadivaleh, 2012).

This method allows the enhancement of recovery to extend to greater lateral lengths of the well. While the fractures themselves are approximately 0.25 inches or less, the effective horizontal length of the well may extend to 3000 feet (Taleghani, 2009). A hydraulic fracture will propagate towards the direction of least resistance; therefore, it grows in the direction perpendicular to the smallest of the three principal stresses.

Figure 1 below illustrates the interaction between a hydraulic fracture approaching a natural interface. The smallest principle stress is generally in the horizontal plane, as seen in Figure 1, indicating that the fracture is restricted by the vertical plane. This is common for most reservoir depths of interest in the petroleum industry. Hence, the fracture will propagate in the direction normal to the minimum horizontal stress.

The direction of propagation is significantly influenced by; the rock mechanical properties, in-situ stresses, rheology of the fracturing fluid and the presence of discontinuities (Taleghani, 2009). Discontinuities are classified as any mechanical break or plane of weakness in rock mass. These include; bedding planes, faults, foliation, fractures, joints, rock cleavage and shear zones (B.B.S. Singhal, 2010). In the following section, the effects of a natural fracture present in the formation on hydraulic fracturing propagation will be explored. 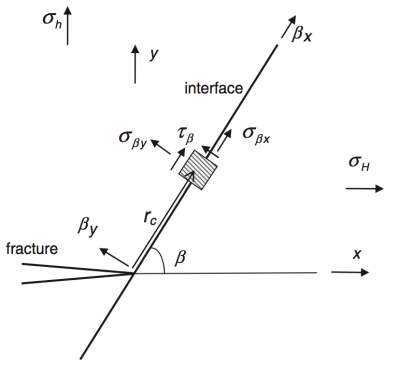 Figure 1 Schematic of a hydraulic fracture approaching a natural interface (H. Gu, 2012) and the slippage zone.

1.3 Interaction between hydraulic fracture and the natural interface

Natural fractures can form due to tectonic movement after deposition or from the pressure formed when hydrocarbons were created (King, 2012). It is generally assumed that natural fractures form in the vertical direction in-situ, hence it is most efficient to drill horizontal wells (Norbeck). The interaction between a hydraulic fracture and the natural interface is dependent on in-situ stresses, mechanical properties of the rock and the existing natural fracture, angle of approach and hydraulic fracture treatment parameters, including the fracturing fluid properties and injection rate (H. Gu, 2012) In general, we consider three main interaction mechanisms, arrest or slippage, opening and crossing (Sarmadivaleh, 2012).

At this point, the natural fracture is already under the influence of the stress field generated by the hydraulic fracture. The net fluid pressure; the difference between the fracturing fluid and the in-situ stresses, at the intersection point is considered zero. Hence, when analysing this process, we consider the mechanical interactions between the induced fracture and the natural interface without considering fluid flow (H. Gu, 2012).

Numerous outcomes may occur as a result of a hydraulic fracture propagating towards a natural interface. These include arrest (slippage) and crossing, and are depicted in Figure 2 below. Secondly, the fluid pressure increases once the fluid front meets the intersection point of the natural fracture. For the slippage mechanism, if the fluid pressure is greater than the normal compressive stress, it is possible for the fluid to flow into and dilate the natural fracture. If this is the case, and the flow of fluid into the fracture continues, the dilated fracture becomes a part of the fracture network as the induced fracture turns and propagates along the dilated natural interface (H. Gu, 2012).

If a hydraulic fracture crosses the natural interface without opening the fracture or a change in direction, it is considered a planar fracture. This is caused when the fluid pressure is less than the normal stress on the natural fracture. Enhanced leak-off may occur if the rock is permeable. Conversely, if the fluid pressure if greater than the normal stress, the induced fracture will not cross the natural interface but instead dilate and propagate along the natural fracture, and a complex fracture network may form (H. Gu, 2012). The offsetting interaction mechanism has also been included in Figure 2. This mechanism works by first initiating a fracture and opening the natural interface, followed by reinitiating along the interface at a point other than at the interaction site (Sarmadivaleh, 2012). 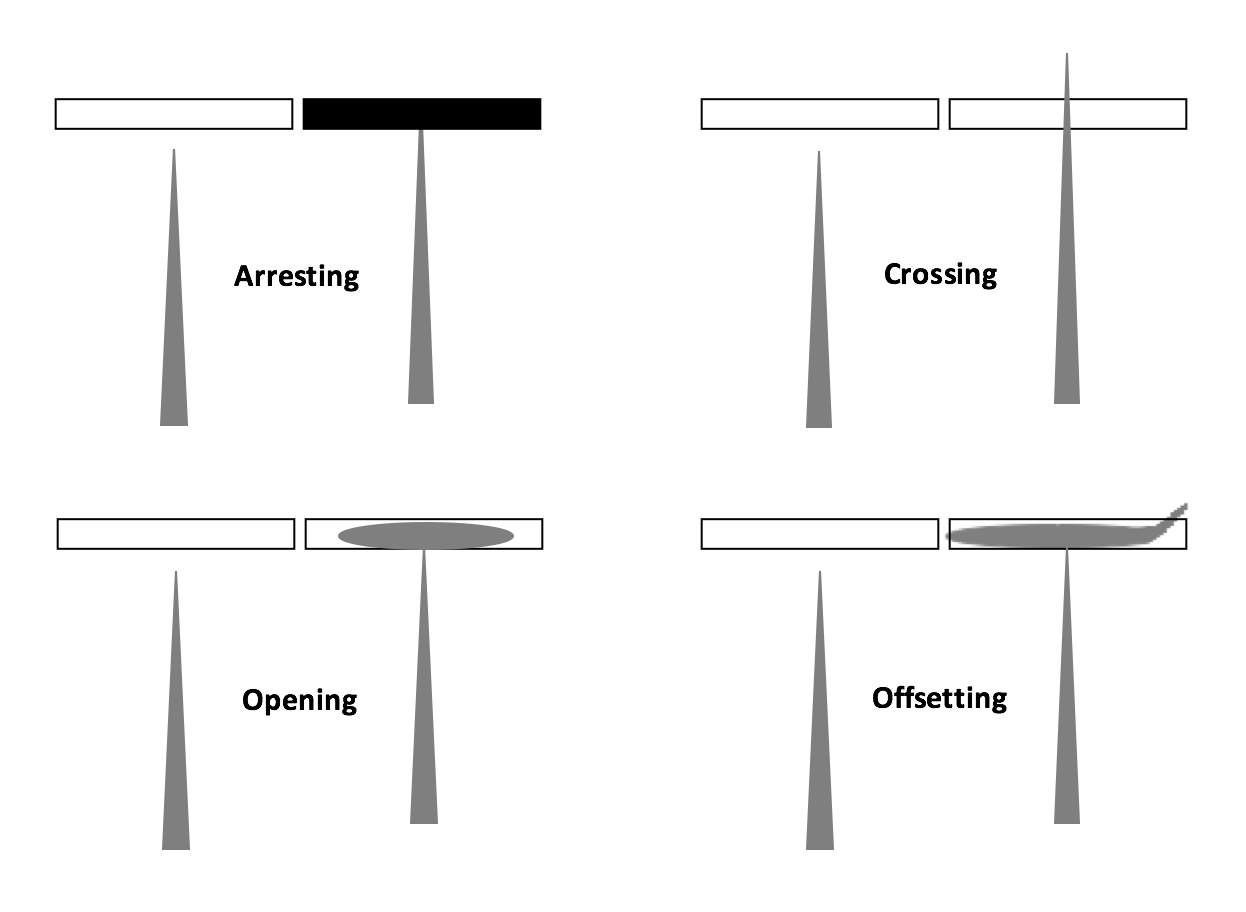 Figure 2 Potential interaction mechanisms between a hydraulic fracture and the natural interface (Sarmadivaleh, 2012).

Consequently, the location of where to hydraulically fracture is arbitrary. The current method of selecting the hydraulic fracture initiation points is to equally space them in segments along the horizontal well. Upon execution of this method, it can be detrimental as the induced fractures may damage the natural fracture system or completely miss the fracture network (Norbeck).

Several criteria have been developed to predict the behaviour of the induced fracture at the natural interface. A criterion based on ‘compressional crossing’ was proposed by Renshaw and Pollard (1995), which looks at a crossing interaction at orthogonal angles. This criterion has been modified for non-orthogonal angles and non-orthogonal angles with a non-cohesive interface. This is suggestive that the criterions available are not yet fully developed for all possible cases in the reservoir. These criteria were proposed over a decade ago, and as such, newly developing ideas have been presented with experimental and numerical data to validate them. Hence, the purpose of this research is to close the gap between the existing literature and the newly surfaced information. Lab experiments and numerical simulations have been used to validate the proposed analytical solutions.

This thesis comprises of five chapters.

Chapter 2 reviews the literature already presented for this topic. It explores the analytical solutions used to determine the interaction between a hydraulic fracture and the natural interface.

Chapter 3 presents a new analytical model along with the relevant experimental and laboratory data to validate the model.

Taleghani, A. D. (2009). Analysis of hydraulic fracture propagation in fractured reservoirs: an improved model for the interaction between induced and natural fractures. (Doctor of Philosophy), University of Texas at Austin, Austin, Texas. Retrieved from https://repositories.lib.utexas.edu/bitstream/handle/2152/18381/dahitaleghania23003.pdf?sequence=2&isAllowed=y

Geology is an “Earth science” or “geoscience” concerned with the study of the physical structure of the Earth (or other planetary body) and the rocks of which it is made, the processes that shaped it and its physical, chemical and biological changes over time.

GROUNDWATER QUALITY & PROTECTION IN AUSTRALIA Abstract The overall objectives of the research are to review the groundwater contamination and remediation. The approach relies on finding the best ...

This thesis examines the interaction mechanisms mentioned above with the objective to understand the effects of how a hydraulic fracture interacts with a naturally fractured reservoir....