Listeria monocytogenes is a gram positive, facultative anaerobe and a non-spore forming bacterium that is extensively spread in several environments and has been mostly detected in many RTE (ready to eat) foods. The safety limit for Listeria monocytogenes in foods according to the European Union is set to 100 CFU/g(1). It can survive in a wide range of pH (4.0 to 9.5), temperature (1-45C), salt (12%) and water activity of 0.92 (2). Different parts of factories like floors, drains, stagnant water, food manufacturing and processing equipment like freezers,  Listeria are frequently isolated and detected(3).  These are biofilm formers and hence more ubiquitous in the processing environment(4). Since most of the decontamination process in factories are alkaline based it doesn’t affect Listeria as it has the capability to survive under alkaline conditions. Inside a processing plant, the most vulnerable sources of contamination include conveyor belts, slicing equipment’s, brining and packaging machines (in the case of cheese).

Listeria monocytogenes is an adaptable foodborne pathogen which causes two types of disease namely enteric and systemic which can cause abortion and still births for a pregnant women and meningitis in the case of newborn infants and immunocompromised adults (5). The traditional methods  used for the detection of Listeria monocytogenes involves enrichments, selective and differential plating to obtain colonies followed by confirmatory testing using different biochemical characteristics exhibited by Listeria(6). All these methods take extended time for isolation and detection. Hence newer methods like rapid testing methods which can give results in hours are being widely used(6).The dairy products have been mostly associated with Listeria outbreak(7) particularly fresh cheese. Soft cheese provides excellent growth conditions for Listeria monocytogenes (8).

Listeria contamination isgenerally through post processing (environment)as it cannot survive the high temperature short time pasteurization treatment or it can also originate from the raw milk in the case of soft cheese(1). In the dairy industry, predominantly soft cheeses are posing a major risk to the health as it is one of the leading source for the outbreak of L.monocytogenes. The foodborne disease affects all the vulnerable age groups of population (immunocompromised, neonatal, pregnant women, elderly and children). 20-30% is the mortality rate for this foodborne infection. The contamination occurs primarily due to the conditions prevailing in cheese processing which favors the growth of this pathogen. Almost every dairy processing plant are likely to be contaminated with the Listeria monocytogenes. Due to the specific abilities of Listeria to with stand all the processing parameters and the conditions it is creating a potential threat to the control its growth in food products(2).

The conditions of cheese manufacturing, ripening process and storage environments influences the growth and the survival of Listeria in cheese products. The soft cheese generally has a pH 4.5-6.5, NaCl 2.3% to 3.5% and these conditions are considered to be a part of hurdle technology for the food preservation but it does not help to prevent the growth of Listeria as it is resistant to these conditions. During the ripening process the brine solutions used may be contaminated with Listeria monocytogenes.(9).As a result these normal traditional preservation methods fail in preventing the growth of Listeria monocytogenes. 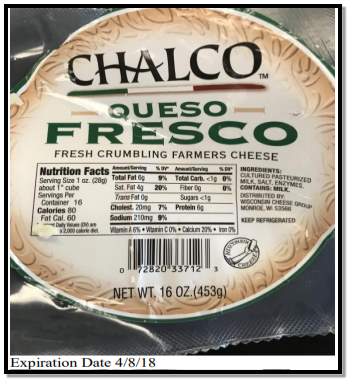 Samples of Fresco was brought from a grocery store. The fresco was weighed to 25g and 225 ml of UVM1 broth was added to it in a stomacher bag. Another 25g of Queso Fresco was weighed and 225 ml of water was added to it along with LESS powder into another stomacher bag. Both the samples were homogenized using a stomacher for 2 minutes. The bags were sealed and incubated for 24 hours at 30°C.1ml of the UVM1 sample ( after incubation) is transferred into 9 ml of Fraser broth in duplicated and incubated at 35°C for 24 hours. Environmental sampling was done by swabbing the freezer and 3 ml of the swab was transferred into the Listeria Petri film and incubated at 35°C for 30 hours. Three phase streaking was done with 4 Modified Oxford Agar (MOA) plates and 4 PALCAM agar plates from the incubated Fraser tubes. 2 of plates of MOX and PALCAM for each test tube (Fraser) and were incubated at 35°C for 24 hours. 1 ml of the incubated sample from LESS was transferred to an empty test tube and boiled for 15 minutes. 200μl of the sample was transferred into a Reveal test well and the test strip was inserted into the well and left for about 20 minutes and the number of bands on the strip was noted and examined. The MOX and PALCAM plated were checked for the growth of colonies. Stabbing was done in Tryptic Soy Agar with blood (TSA+Blood) agar at 4 different spots and with 4 different colonies. 4 quadrant streaking was done with the Tryptic Soy Agar with Yeast Extract (TSAYE) and Rapid L.monocytogenes agar. Both the plates were incubated at 35°C for 24 hours. The plates were then observed, examined and compared with the controls.  2 selected colonies from the TSAYE agar plates were selected for Gram staining. Hydrogen peroxide was added to Rapid L.monocytogenes agar plated and the production of gas (Catalase test) was observed and recorded. The complete procedure for streak plating, aseptic techniques, colony counting rules, Gram staining were all done according to the method stated in the laboratory manual [13].

Table 1: Isolation of presumption L.monocytogenes colonies on selective agar media and biochemical and morphology of isolates.

Table 2: Colony morphology of the isolated colonies with Gram staining

The individual colonies isolated from Quesco Fresco were found to be negative for Listeria monocytogenes. UVM 1 broth is the primary enrichment step which is done to enhance only the growth of Gram positive Listeria as it contains nalidixic acid, acriflavin which inhibits the growth of Gram negative bacteria and Gram positive bacteria other than Listeria. Fraser broth is also enrichment media but it is selective as it contains lithium chloride in addition to acriflavin and nalidixic acid which inhibits the growth of enterococci. The media also contains esculin, ferric acid and ammonium citrate which acts as differential agents. The Fraser tubes had a dark precipitate at the bottom which may be due to contamination of the broth. The broth appeared turbid which indicates the growth and presence of Listeria spp. There was no growth of Listeria in the petri film which was incubated for environmental sample. The place( freezer) which was swabbed was found to be clean and negative for Listeria monocytogenes. For the Rapid LESS test there was appearance of only a single band which indicates that a negative test for the presence of Listeria monocytogenes.

The MOX (Modified oxford Agar) is a selective differential medium used for the isolation of Listeria monocytogenes as it can grow in the presence of antimicrobials and the medium contains lithium chloride, colistrin sulphate and moxalactam. The Listeria can produce an enzyme which can hydrolyze esculin and this product in turn reacts with iron (ferric ions) of ferric ammonium citrate to produce a characteristic black precipitate. All the 4 incubated MOX agar plates were positive for the growth of the colonies and were white in color but no black precipitate was observed. PALCAM agar is another selective differential medium which is used for the isolation of Listeria spp. The medium contains lithium chloride, polymyxin, acriflavin, ceftazidime as selective agents and esculin, ferric ammonium citrate and mannitol- phenol red as differential agents. The hydrolysis of the esculin leads to medium blackening and also the growth of mannitol fermenting bacteria will increase the acidity of the medium and changes the color of the medium from red to gray to yellow. All the 4 incubated plated for the PALCAM agar did not have any growth in them and the reason may be due to the agar. The medium was soft and the agar was not properly prepared as even the positive and negative controls did not grow in the medium. 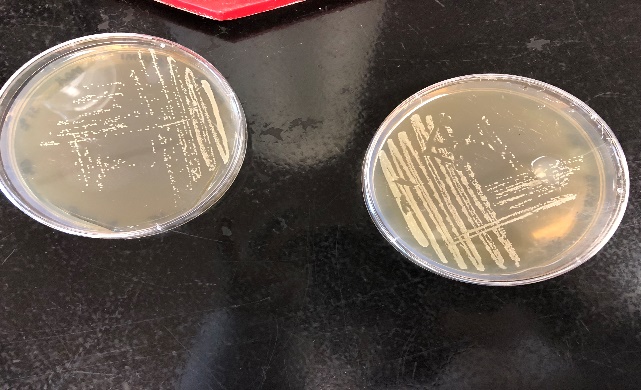 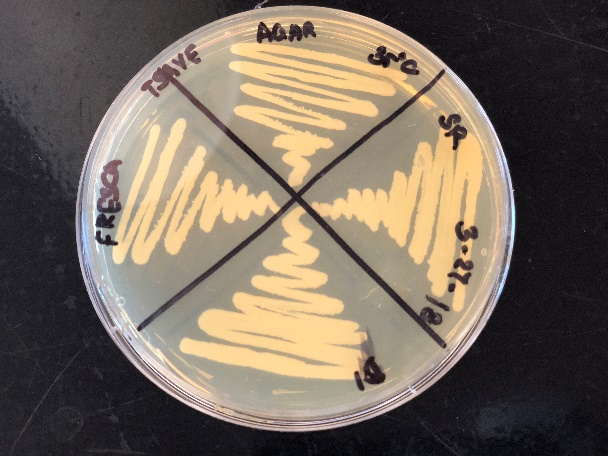 The TSAYE (tryptic Soy Agar with yeast extract) is a nutrient rich, non-selective medium which contains both TSA and 2% yeast extract and is generally used for the colony morphology as it provides a clear background. The colonies in the TSAYE agar were observed to be white and there was no appearance of any bluish grey taint of Listeria colonies. The Rapid Biorad Listeria monocytogenes agar is also a nutrient rich medium and helps in the identification of the L.monocytogenes. The color of the agar changes from orange to purple in the presence of Listeria monocytogenes. There was no significant changes in color in the agar plates except for the growth of colonies. 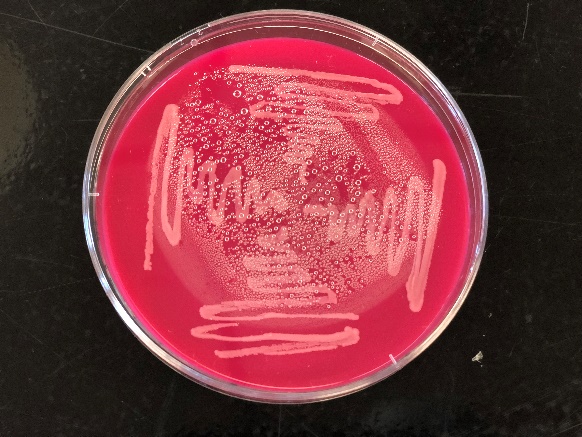 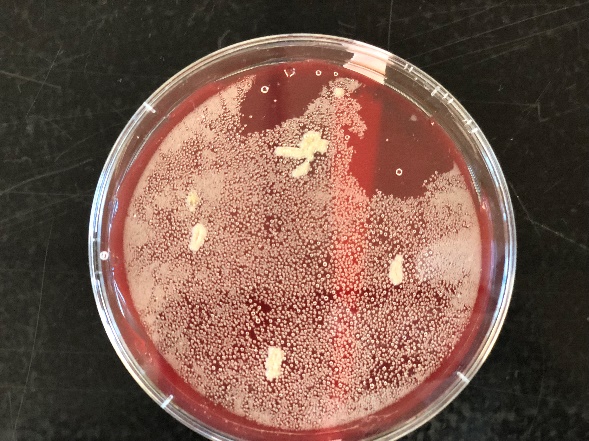 Listeria monocytogenes can grow between to -0.4 to 50˚C. It is catalase positive and oxidase negative and also produces an enzyme for β hemolysis (10). Queso Fresco is a Hispanic soft cheese which has a shelf life of 30 to 60 days if they are kept refrigerated. The production of Fresco is only allowed with pasteurized milk in the United States. The cheese curds are only processed at 40˚C. Fresco can be contaminated during the cheese manufacturing or during post process packaging. Due to the high moisture, low salt content and neutral pH, it is an excellent substrate for the growth of L.monocytogenes as well as other spoilage bacteria(11). Queso Fresco (is one of the popular fresh soft Mexican style cheeses) has been classified as FDAs cluster 1 to ready to eat food products with the highest risk of Listeria monocytogenes contamination. The conditions of the cheese manufacturing and processing enhances the ability of L.monocytogenes cells to multiply under refrigeration storage(12).

9.  McLauchlin J, Greenwood MH, Pini PN. 1990. The occurrence of Listeria monocytogenes in cheese from a manufacturer associated with a case of listeriosis. Int J Food Microbiol 10:255–262.

CHAPTER ONE BACKGROUND Exposure to aflatoxin or its metabolites have been shown to play an important ro...

Abstract The environmental concerns about the formaldehyde emission from commonly used wood adhesives have put great attention to find a bio-based renewable substitute for them. Soy protein is abunda...