Investigating the Optimum Temperature Essential for the Maximum Activity of Enzymes.

Enzymes are important for metabolic reactions within living organisms. As a catalyst, enzymes are responsible for more than 5,000 distinctive chemical reactions (Tabbabi, 2018). Without enzymes, crucial processes such as the utilisation of glucose by cells would cease to occur (Tabbabi, 2018). Enzymes contain what is known as an active site, this is where a process called catalysis occurs (Weng et al., 2011). Channel reactants, called substrates, are syphoned into the active site (Champe et al., 2005). This area of the enzyme has a complementary shape to the substrate, this means the substrate and active site can bind together, constructing what is known as an enzyme-substrate complex (Champe et al., 2005). This complex is then reformed back into the enzyme and desired product (Champe et al., 2005).

Amylase is a type of enzyme. This enzyme has two forms, α-amylase and β-amylase. α-amylase is found within microorganisms, animals as well as plants, while β-amylase is found in bacteria and plants (Uozumi et al., 1989). Both, however, hydrolyse starch linkages (Uozumi et al., 1989).  In the human body, amylase aids in the process of digestion by transforming starch into maltose (Simpkins and Williams, 1989). Amylase can be found in saliva and is also produced by the pancreas, within humans (Ross and Wilson, 2006). Amylase has industrial uses, for example, in the brewing industry (Simpkins and Williams, 1989). Enzymes activity can be affected by several factors, such as temperature. Industries will aim to use the most favourable conditions, also known as the optimum, to get a product faster. The aim of this study was to investigate and discern the optimum temperature of the enzyme amylase, using a wide array of temperatures over a period time, to calculate the reaction time.

Results show that the enzymes in the 40oC starch solution had the quickest reaction time. Because of this, 40oC is the optimum temperature. The trend of the graph shows a steep rise before reaching a certain point, then dramatically decreasing. The 80oC and 0oC solution had no change in reaction after 33 minutes. 80oC had the most gradual reaction time out of all the temperatures utilised for the experiment. From 0oC to 40oC, the reaction time increases, before decreasing. Figure 1 shows this trend.

Figure 1: The reaction time (1/t) for each temperature of amylase used. 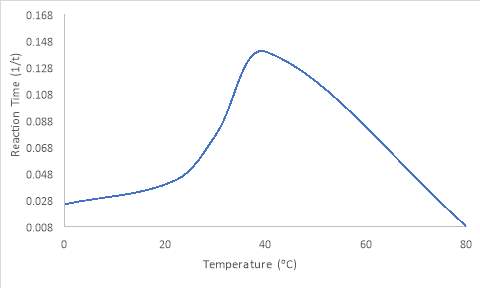 80oC and 0oC reaction time was predicted as no change was viewed after 33 minutes.

To summarize, the amylase at 40oC had the fastest reaction time as compared to the other temperatures, thus, this is the optimum temperature for amylase. This can be explained as normal human body temperature is 36.8oC (axillary) (Waugh and grant, 2006). 40oC is closest to normal body temperature and therefore, the amylase at this temperature, would rapidly reach the endpoint. The other temperatures utilised were either too cold or too warm. Heat is important for the process of catalysis as it provides the substrates with kinetic energy, which causes them to move at a rapid pace (Simpkins and Williams, 1989). A higher temperature means that there is a vast chance more collisions between enzymes and substrates occur, meaning more enzyme substrate complexes form, however, too high a temperature can cause enzymes to denature due to chemical bonds within the enzyme being broken (Simpkins and Williams, 1989). This causes the active site to change shape (Simpkins and Williams, 1989). This can explain why high temperatures, like 80 oC, did not reach the endpoint, because an enzyme substrate complex could not form. The amylase at room temperature (22oC) and 30oC is under body temperature. For this reason, the endpoint was achieved at a slower rate.

In human beings, hypothermia sets in when core body temperature is under 35oC  (Waugh and Grant, 2006). When the temperature of the body drops, enzymes catalytic efficiency also reduces, this causes the enzymes to be unable to change shape during catalysis (Marshall, 1997). The induced-fit mechanism was proposed by Koshland and theorises that enzymes active sites change shape when binding to a substrate (Simpkins and Williams, 1989). This process will not occur if the temperature of the body is too low consequently meaning that the endpoint will not be reached, helping to explain why the amylase at 0oC only produced a blue-black colour when in contact with the iodine. As well, lower temperatures cause constraints on the amount of kinetic energy substrates have (Guy et al., 1992). Therefore, the substrates have less energy, which means fewer collisions, resulting in a lack of substrate enzyme complexes. The explains the large amount of time taken for the lower temperatures to reach the endpoint.

During the experiment, some problems where uncovered. For example, using a colour change could be considered an informal and subjective way of gathering data. Subjective because what may be considered the endpoint by one person, could be rebutted by another.  There is no absolute way of proving that the endpoint has been reached by judging colour change by eye, while only using iodine. Therefore, the data gathered may be incorrect and inaccurate. The data is also not specific. How many minutes the endpoint was supposedly reached at, does not qualitatively show the endpoint. This can mean the results gained can be respited. Due to having many different people working to gain one set of 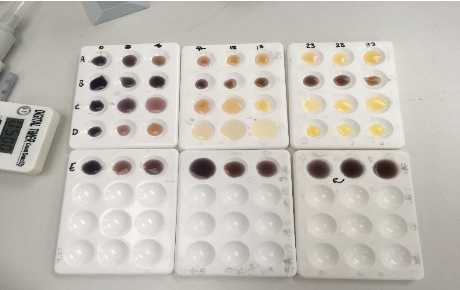 data, more liquid was placed into some wells of the indented tile than others. This can be seen by plate 1 below.

Plate 1: The amount of liquid filled in each well of the tiles.

This may have affected the colour shown when the iodine was added, as some colours may be more concentrated. Connotating that some colour changes recorded where incorrect.

There are many improvements to the experiment. A spectrometer may be used instead. A spectrometer is a piece of equipment that allows the measurement of wavelengths (ATA Scientific Instruments, 2016). Using a spectrometer, enzyme-catalysed reactions can be easily observed and sets of qualitative data can be gathered (Bothner et al., 2000). Temperature is not the only factor which can affect an enzyme, pH also has an optimum. Using an indicator, known as phenolphthalein. This indicator is pink in slight alkaline substances however turns clear in strong alkaline substances (Reference.com, n.d). This indicator can be used instead of iodine, to investigate the optimum temperature of pH. In terms of an excess of liquid in the wells, if the experiment was repeated, a more accurate measure of liquid should be used to ensure the concentration of colour in the wells in not too little or too plenty, allowing for a more accurate recording of results.

The optimum temperature of amylase was found to be 40oC. For industries that utilise amylase to create products, it should be aimed to use a temperature around 40oC

What Is Spectrometry And What Is It Used For? – ATA Sci. (2016) [online] [Accessed: 14th December 2018] Available from: https://www.atascientific.com.au/spectrometry/

The intent of this research is to review literature published on the prevalence of bacterial foodborne pathogens found in milk and dairy environments....

THE INFLUENCE OF DIFFERENT TIME (MIN) AND HEATING TEMPERATUES (°C) OF WATER ON VITAMIN C AND SUGAR ABUNDANCE IN RED DELICIOUS APPLES (100G) ABSTRACT Fruits as we all know are crucial to maintaining a...