Beta-adrenergic blockers have been used in treating hypertension for decades now. They are used alone and in combination with other drugs. Propranolol is a non selective first generation beta blocker. Atenolol is a cardioselective second generation beta blocker. The aim of this report was to compare the different properties of both the drugs and determine which drug would be better suited for patients. After comparing the literature available on both, it is seen that based solely on their properties atenolol should be preferred over propranolol. However it was also seen that condition of the patient should be given prime importance and prescription of either drugs should be only after evaluating their effects on each patient.

B adrenoceptors are coupled to G proteins which activate adenylyl cyclise. This leads to the formation of cAMP from ATP. Increase in cAMP causes the activation of PK-A leading to phosphorylation of L type calcium channels. This causes increased entry of calcium in the cells which further causes increase in levels of calcium released by sarcoplasmic reticulum. Thereby increasing the contractility or ionotropic effect on heart.(Richard E. Klabunde 2017).Apart from that, beta adrenergic receptors also cause relaxation of vascular and bronchial smooth muscles. Beta blockers are used for treating hypertension, angina, myocardial infarction, arrhythmias and heart failure. They are classified as beta 1 and 2 blockers based on their ability to inhibit the actions of the sympathomimetic amines on beta receptors.(LANDS et al. 1967).

PHYSICAL PROPERTIES OF PROPRANOLOL AND ATENOLOL 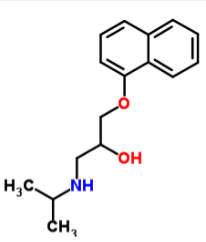 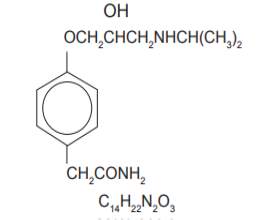 Propranolol is a racemic mixture of R(+) and S (-) enantiomers. The R enantiomer is 100 times less potent than S enantiomer in blocking the beta receptors. Both the enantiomers show membrane stabilising activity and thereby inhibits electrical responses.(Doggrell 1990). Membrane stabilising activity of propranolol is thought to be responsible for its local anaesthetic effect which is seen in case of intoxication of the drug. Clearance of S enantiomer is lower than that on R enantiomer. The enantiomers of atenolol did not show any significant difference in renal clearance and half lives.(Boyd et al. 1989).

PHARMACOKINETICS OF PROPRANOLOL AND ATENOLOL

The pharmacokinetics of propranolol depends on the route of administration. On oral administration it is completely absorbed. It undergoes first pass metabolism by the liver and as a result only 25% of the drug reaches the systemic circulation. The drug is 90-95% bound to plasma which greatly affects the volume of distribution. The half life of propranolol is 3-6 hours. However there may be interpatient variability as the half life may be prolonged in patients with low plasma binding. (PMC 1976). On oral administration, atenolol is incompletely absorbed from the intestine. But since it does not undergo first pass metabolism, 50% of the drug reaches systemic circulation. Only 3% of atenolol is bound to plasma. As a result interpatient variability with respect to plasma binding is not seen with atenolol. The half life of atenolol was found to be 6-9 hours.(Kirch 1982)

Propranolol has the following major metabolites:  naphthoxylactic acid(NLA), 4-hydroxypropranolol(4-OH), naphthoxy acetic acid(NAA), propranolol glycol(PG). 90%NLA was found in plasma and bound to protein.It is present 25 times than propranolol. NAA and 4-OH levels were almost the same as propranolol and PG less than 12 % of propranolol.Propranolol undergoes aromatic hydroxylation by CYP2D6.Side chain oxidation is carried out by CYP1A2 and CYP2D6. As the doses were increased, a decrease in intrinsic plasma clearance was seen. The half life also increased from 3 to 5 hours.(Schneck et al. 2017).On continued administration of doses, the hepatic removal of propranol becomes saturated and it gets accumulated. A 20 fold variation in plasma level concentrations can be seen on repeated administration of the same dose to different patients.(PMC 1976).Atenolol barely undergoes any metabolism by liver and the absorbed portion of the drug is eliminated by liver. Only a 4 fold variation is seen in patients on repeated administration of the doses.(Kirch 1982).Since the half life of propranolol is low it has to be administered multiple times daily depending on the type of dosage form. Since atenolol has a high half life, its antihypertensive effects are seen for at least 24 hours. Therefore multiple doses in a day are not required.(Heel et al. 1979)

The pharmacokinetics of both these drugs depends on their lipid solubility. The distribution and metabolism of drugs will depend on their partition coefficient. Propranolol which is lipophilic has a high partition coefficient of 9.42.Atenolol which is hydrophilic has a very low partition coefficient. Propranolol is excreted by the liver. Atenolol is excreted by the kidney. Based on a study in rats by Ahokas(Ahokas, Davies and Ravenscroft 2017),it was found that propranolol inhibited ethoxyresorufin deethylase whereas atenolol had no effect on cytochrome p450 reactions. Thus it is seen that propranolol can affect and even inhibit drug metabolism which are catalysed by p450 enzymes. Also high lipid solubility means that the volume of distribution of propranolol is higher than that of atenolol.

Since Propranolol is a lipophilic drug, it readily crosses the blood brain barrier. Propranolol has been shown to be involved in severe beta blocker poisoning. It is responsible for CNS depression, seizures and prolongation of QRS complex.(Adhi Sharma 2017) Atenolol on the other hand being hydrophilic does not cross it. As a result it does not show any significant CNS side effects.(Kirk and Cove-Smith 1983).The FDA classifies propranolol and atenolol as pregnancy category C and D.(2017c, 2017a).Both these drugs should be taken during pregnancy only if the potential benefits outweigh the risks associated with them.

ALTERATION OF EFFECTS OF PROPERTIES DUE TO PATIENT RELATED FACTORS

Propranolol blood concentrations when compared between healthy volunteers and those with chronic renal failure; was seen that blood concentrations of propranolol were 2-3 times higher than normal. Also a significant increase in dose available during systemic circulation was found.(Bianchetti et al. 1976).When atenolol comparisons were made in healthy individuals and those with renal impairment, it was seen that the half life in those renally impaired was significantly higher ie.36 hours compared to that of six hours/100 mg dose in healthy people.(Sassard et al. 1977)The blood clearance of atenolol also was reduced. Thus, both Propranolol and atenolol should be used with caution in renally impaired patients. Propranolol being lipid soluble cannot be removed by dialysis whereas atenolol can be. Hence patients undergoing chronic dialysis and on treatment with atenolol are at a higher risk of death. This is because in the interdialytic period, the concentrations of atenolol increased, whereas during dialysis the plasma clearance was rapid. This suggests that patients on chronic dialysis should have modified doses of atenolol.(Flouvat et al. 1980).

In patients with cirrhosis, administration of single dose of propranolol showed higher concentrations of drug in plasma and in those with severe damage, the drug was detected even after 24 hours. Also the heart rate fell to a greater extent than normal because of these high concentrations.(Arthur et al. 1985). Atenolol can be used in patients with hepatic impairment as it is water soluble and eliminated by the renal route.(2017b).Since propranolol is metabolised by CYP2D6,CYP1A2,CYP2C19 substrates or inhibitors of these drugs like cimetidine, ritonavir and fluconazole may cause increase in propranolol blood levels and toxicity. (2017c) Since atenolol is not metabolised by these enzymes inhibitors of these do not cause as much of a effect on its kinetics.

Since Atenolol is beta 1 selective,it does not block the beta 2 receptors. As a result beta 2 receptors are available for bronchodilation. This is not the case with propranolol as it blocks beta 2 receptors and as result worsens the conditions of obstructive pulmonary disease or asthma.However in higher doses even atenolol loses its beta 1 selectivity and blocks beta 2 .Therefore, even though atenolol can be given to patients with bronchial diseases its dose in these patients should be monitored closely.(Frishman and From the Department of Medicine 2007)

In an insulin induced hypoglycaemia, it was observed that the concentration of free fatty acid that decreased due to insulin was not normalised because of propranolol. It also caused an increased response of epinephrine and growth hormone to hypoglycaemia. Thus it increased the uptake of glucose which was not balanced by a subsequent increase in glucose production thereby prolonging hypoglycaemic response to insulin significantly. However atenolol did not prolong this response as much as propranolol and was insignificant.(Lauridsen, Christensen and Lyngsoe 1983). Propranolol was also shown to induce hypoglycaemia when used as treatment for infantile hemangioma.(Breur et al. 2011)

In case of physical activity, propranolol was shown to reduce half life and AUC on days when it was administered before exercise than on days without exercise. The bioavailability and plasma concentrations of propranolol also were significantly reduced.(Arends 1986).Atenolol on the other hand counters the increase in cardiac output during exercise by an increase in stroke volume. It also causes a decrease in catecholamines which has effects on heart rate, contractility and systolic pressure. Thus it is seen that exercise tolerance is better seen with atenolol.

The heart rate and systolic blood pressure was seen to increase on sudden withdrawal or propranolol. In patients with stable history of angina, it caused unstable anginal syndrome. Plasma catecholamines concentrations were also increased.(Frishman et al. 1982) Contrary to propranolol, sudden withdrawal of atenolol did not cause significant coronary changes. There was no increase in heart response to exercise or change in catecholamine concentration. There was no adrenergic hypersensitivity seen. Thus it is seen that apart from a few minor complications atenolol withdrawal does not worsen the patients’ conditions.(Walker et al. 1985).This could be because of the long half life of atenolol since there is an inverse correlation between adrenergic hypersensitivity and half life of beta blockers.(Krukemyer et al. 1990)

Beta-adrenergic drugs are very established in the treatments of angina pectoris. Both propranolol and atenolol have been used widely by patients. However propranolol has certain disadvantages: short pharmacokinetic half-life, nonsepcific beta blocking activity and severe CNS side effects. Atenolol on the other hand is cardioselective, does not show as much CNS side effects and has a long plasma half-life. Between propranolol and atenolol, atenolol seems to be the drug of choice. However, atenolol can be contraindicated in certain patients with certain impairment or when co-administered with other drugs. As a result, the decision to administer either propranolol or atenolol should be based on the specific requirements and condition of the patient taking it.

Castleden, C. & C. George (2017) The effect of ageing on the hepatic clearance of propranolol. British Journal of Clinical Pharmacology, 7, 49-54.

— (2017) A Historical Perspective on the Development of β‐Adrenergic Blockers. The Journal of Clinical Hypertension, 9, 19-27.

Pharmacology involves the study of drugs and how they affect the body. A pharmacologist contributes to drug development by researching and testing how the body reacts to medication, and whether the medication can have a positive impact on the body in terms of fighting illness and disease.

This study was designed to determine and evaluate the prescribing pattern of Sana’a government hospitals when prescribing antibiotics....

Development and Improvement on a Plant-derived Vaccine for Hepatitis B

Contents Lay Summary Abstract Introduction What is a plant-derived edible vaccine? How do they work? Advantages and disadvantages? What edible vaccines are there at the moment? The Problem Target Eva...