Over the last few decades, supercritical fluids have emerged as alternatives for conventional organic solvents in various industries [1]. Fluids in supercritical conditions remain in single phase but behave with both gas-like and liquid-like properties. Due to its gas-like and liquid-like properties, small changes in pressure can result in significant variations in the fluid density [2]. Variations in density of supercritical fluids can be exploited to either enhance or diminish the solvent power, depending on whether the fluid is being utilised as a solvent or an anti-solvent [3]. In addition, its high diffusivity and low viscosity compared to other liquid solvents offers a much more rapid equilibration rate [2]. These properties can be advantageous in industry applications as supercritical fluids are poised to yield environmentally friendly products with high purity and quality. Therefore, use of supercritical fluids has grown in applications such as particle extraction, recrystallisation and food processing.

Of many supercritical fluids, supercritical carbon dioxide (scCO2) has proven to be the most feasible solvent. ScCO2 is a nonflammable, nontoxic, inert, inexpensive solvent that is also environmentally benign [4]. Moreover, it has a near ambient critical temperature of 304.1 K and an easily accessible critical pressure of 73.8 bars [2]. Hence, majority of applications involving supercritical fluid technology utilises scCO2 as the replacement for conventional solvents. Some of these applications include decaffeination of coffee/tea, pharmaceutical processing and polymerisation. Due to the increasing popularity of scCO2 as an industrial solvent, research of modelling solubility in scCO2 has received growing attention [5].

The following project explores existing models of solubility in scCO2. With Chrastil’s model being one the first developed solubility models, it initially had many limitations. Early solubility models have shown inconsistencies and significant errors between experimental and calculated data [6]. Motivation of this research project comes from past enhancements which have been made to earlier solubility models. Previous developments have posed noticeable improvements in producing more reliable results [6]. It is clear that understanding of solubility models can still be strengthened by filling some knowledge gaps that are still present. Solubility data of numerous solutes are quite limited in literature and experimentally determining the data can be tedious and time-consuming [7].  Thus, accurate solubility models that can correlate wide range of solute solubility in scCO2 can be crucial for industrial purposes.

Although solubility data of scCO2 can be obtained through experimental methods, mathematical models are often used to represent solubility relationships. This project intends to evaluate existing models of solubility in scCO2 to gain an insight on the possible improvements which can be implemented to produce more reliable results. Furthermore, the project aims to perform a comparison of semi-empirical (correlation between solubility and density [8]) and equations of state based models to determine which method is preferable. Research and literature proves that the current modelling of solubility in supercritical carbon dioxide can be improved in numerous ways. Solubility models have been in constant development to reduce discrepancies between experimental and calculated solubility data [6]. Moreover, solubility models with the ability to accurately and consistently calculate solubility data is desired for many industrial purposes.

An overall aim of this project is to develop an improved solubility model of scCO2 that can produce results at high efficacy. Listed below are the specific aims:

ScCO2 is now the most popular fluid used in various industrial supercritical technologies. However, accurate determination of solubility data through experimental works can be time-consuming and difficult [9]. Interests in expanding the literature of solubility in scCO2 has been growing due to the high demand of supercritical extraction in engineering processes. Therefore, knowledge that can assist in obtaining reliable solubility data can be crucial in applications including food and pharmaceutical uses. The project aims to develop an improved mathematical model of determining solubility in scCO2, as establishing a consistent solubility model of scCO2 will lead to many beneficial factors. One of the benefits of solubility models is that it can assist in evaluating the solvent’s extraction capability. Additionally, it can help determine what operating conditions are ideal to optimise the supercritical extraction process [9]. Ability to determine solubility data through a mathematical model will eliminate the necessity of laboratorial exercises and hence cut the related engineering expenses. Moreover, this project will expand the current literature on solubility models of scCO2.

The project will consider both semi-empirical and equations of state models before proposing an improved solubility model. When evaluating existing models, the research will scope into early, simple models as well as closer to date models that are relatively more complex. Comparing more developed models with earlier models will provide better understanding of how solubility models have made advancements over the years and hence provide suggestions on types of enhancements that can be implemented. The project will assume that solubility data presented by the textbook, Solubility in Supercritical Carbon Dioxide by Ram B. Gupta is accurate. Hence, solubility models will be evaluated by comparing the data presented in the textbook and the calculated data at various range of temperatures and pressures.

Addition of co-solvents is an industrial technique that is used to increase the solvent power of scCO2. Although carbon dioxide possesses little polarity from its quadrupole moment, it is a non-polar molecule [2]. Thus, polar co-solvents are added to raise the solubility of polar solutes. For example, methanol and acetone can be used as co-solvents to augment solubility of organic biocides in scCO2. In fact, small addition of co-solvents in scCO2 has proven to cause dramatic changes in solubility of chosen compounds [10]. However, the research project will not ponder into scCO2 and co-solvent mixtures when evaluating solubility data to ensure that the project does not become excessively complex.

One of the reasons why supercritical fluids have grabbed the attention of physical chemists over the past 150 years is because it can be used as alternatives for organic solvents.  This is mainly due to the reason that supercritical fluids are environmentally benign. There have been many health concerns with using other conventional solvents such as methylene chloride in the pharmaceutical industry. Thus, using “green” supercritical solvents for industrial applications have increased in popularity [3].

ScCO2 is chosen to be the most acceptable supercritical fluid due to its nonflammable, nontoxic and inexpensive properties. The non-polar solvent also possesses a near-ambient critical temperature allowing the

One of the major challenges in the pharmaceutical industry today is overcoming the limitations associated with existing conventional particle size reduction techniques. Mechanical comminution such as grinding, crushing and milling is an inadequate technique as it fails to meet the standard of producing consistently sized, contaminant free products. Moreover, recrystallisation using liquid anti-solvents, freeze-drying and spray-drying have limitations of using excessive amounts of solvent and product degradation [3]. Therefore, ScCO2 is being used as reaction mediums in pharmaceutical industries for formation of micro particle drug compounds. ScCO2 as an industrial solvent offers appealing circumstances for pharmaceutical processes as it results in substantial reduction in usage of other conventional solvents. When compared to other conventional solvents, it can provide greater reaction rates due to its higher diffusivity, lower viscosity and lower surface tension. Furthermore, using carbon dioxide as a reaction medium provides “clean” synthesis to produce contaminant free particles. In addition to its environmentally benign characteristics, scCO2 can vary its solvent strength quite rapidly; it is exploited as a solvent, a non-solvent and an anti-solvent in the pharmaceutical industry.

Rapid expansion of supercritical solutions (RESS) is a technique used for pharmaceutical particle formation which uses supercritical carbon dioxide as a reaction solvent. The RESS technique has been established to produce particles sizing from microns to few hundred microns that are virtually contaminant free. Figure x below is a process diagram of the particle formation technique. Initially, the RESS process requires the solute or drug particle to be solubilised in the scCO2. The supercritical solution then undertakes rapid expansion for around less than 10-5 seconds across the heated nozzle/ capillary [11]. This is possible with the fluid travelling at supersonic velocities. Processing supercritical solutions with speed of sound allows fast consistent attainment of precipitates under expanding conditions. Rapid expansion or rapid reduction in pressure of the supercritical solution leads to significant decline in solvent power and promotes supersaturation of the solute. Therefore, for efficient drug particle formation, the solvent power of scCO2 should be enhanced by dissolving drug compounds in scCO2 at high pressures; exploiting high compressibility of the solvent. In addition, product particle size can be adjusted by changing the length/diameter ratio of the expansion device [3]. 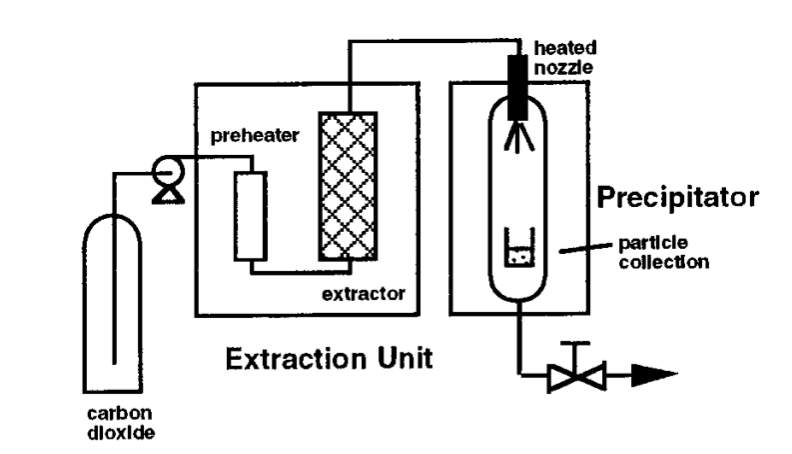 ScCO2 is also being utilised as anti-solvents to recrystallise pharmaceutical compounds to desired particle sizes. Gas anti-solvent (GAS) recrystallisation technique exploits the low solubility of some pharmaceutical compounds in scCO2 [3]. The GAS process is similar to the RESS process in terms of reducing the solvent power to extract solid particles. However, solvent power of the conventional solvent is reduced instead of the supercritical fluid. The solute to be recrystallised is first dissolved in a conventional solvent. The conventional solvent should be fully miscible with scCO2 at the conditions of recrystallisation while the pharmaceutical solute should be insoluble in scCO2. The solution then goes through expansion when it is mixed with dense scCO2 in a vessel. Expansion of the solution will result in reduction of its solvent power and hence, precipitate uniformly sized micro particles. Figure x below is a schematic of the GAS process. 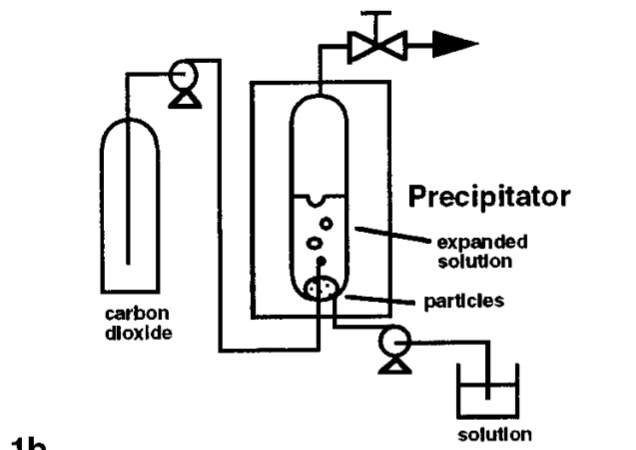 Natural caffeine (1,3,7-trimethylxanthine) can be found in variety of sources including coffee beans, tea leaves and cocoa beans. Demand for decaffeinated products have increased due to the negative health issues that are associated with consuming caffeinated products. Consumption of caffeine for sensitive individuals can lead to health issues such as increased heart rate/blood pressure, mood swings etc. [12]. Therefore, study of caffeine extraction has been gaining more interest, especially in producing decaffeinated coffee. Conventional solvents such as methylene chloride and ethyl acetate have been utilised in decaffeinating coffee beans in previous applications. However, post-decaffeination treatment is required when conventional solvents are used due to its high toxicity [13]. Thus, scCO2 has become the ideal solvent for decaffeination. Process using scCO2 has resulted in high quality products while being environmentally friendly. Furthermore, due to its non-flammability and non-toxicity, post-decaffeination treatment has been precluded from the process [12].

A decaffeination process proposed by Udaya Sankar, Manohar, and Chokkalingam (1986) uses a batch [14]

[14] K. Udaya Sankar, B. Manohar, and A. Chokkalingam, “A note on supercritical carbon dioxide decaffeination of coffee,” Journal of Food Science and Technology, 1986.

The aim of this project is to study how the glass forming liquid glycerol behaves when confined to nanometre-sized pores in a glass substrate....

In this work, a facile method to adjust the interface properties between corn fibers and polylactide (PLA) has been developed by adding nanofillers to the sizing solutions of corn fibers....