This paper examines existing literature on Water Sensitive Urban Design (WSUD), specifically on the topic of the many interrelated social and institutional barriers which impede the widespread implementation of alternative approaches within the urban water sector. Given the extent of cited impediments, the discussion was synthesised into 4 key themes: embedment of an outdated approach in the urban water sector resulting in institutional and jurisdictional fragmentation, inconsistent regulation and uncoordinated frameworks; lack of political will and capacity including inadequate knowledge, resistance to change, and poor leadership; weak economic incentives for public action due to the underappreciation of the true cost of water and externality benefits provided by WSUD processes and techniques and; inadequate community acceptance due to poor engagement. Addressing these key hurdle areas will involve aligning regulation, frameworks and structures to the alternate paradigm of urban water management; introducing capacity building exercises through accreditation and policy interventions; accounting for externalities in economic appraisals and; implementing engagement activities with the broader community.

Despite significant advances in the practice of WSUD as an alternative approach to managing urban water systems, its widespread uptake remains very much in its infancy with many governments, organisations and communities still operating within the traditional paradigm of urban water management (Rebekah Ruth Brown & Clarke, 2007). Over the past decade, various scholars have cited these barriers as broadly social and institutional or “socio-institutional” (Bos, Brown, & Farrelly, 2015; Rebekah R Brown, 2005; Lee & Yigitcanlar, 2010; Maksimovic & Tejada-Guibert, 2001; Marsalek, Rochfort, & Savic, 2001; Sharma, Cook, Tjandraatmadja, & Gregory, 2012).

Meticulous lists of such barriers exist in literature. Indeed, Rebekah R Brown and Farrelly (2009) cited 36 barriers, listing a typology of 12 assessed against a capacity framework (see Table 1 and Figure 1 respectively). This paper will not attempt to review each barrier individually, rather, it consolidates them into four prevalent themes:

The review also provides suggestions to overcome these barriers. 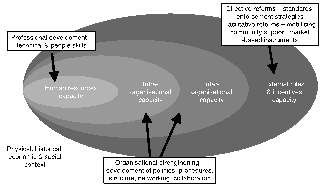 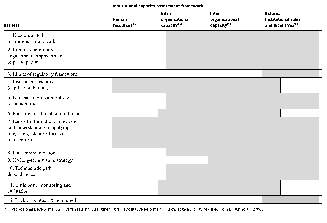 2.1 Embedment of an antiquated “conventional” approach in the urban water sector

Despite significant advances in WSUD techniques and processes, the current system of institutions, organisations and supply options align with the conventional model of urban water management (McCallum & Boulot, 2015). WSUD in practice is heavily weighed down by these very arrangements such that their benefits are rarely fully realised (Sharma et al., 2012)

Table 2 Instances where regulation, institutional arrangements and frameworks have limited the uptake of WSUD

2.2 Lack of political will and capacity

A lack of formal State policy and legal framework for councils to ensure compliance to WSUD requirements indicates a lack of support and leadership at the State level (Choi & McIlrath, 2017).

Adopting the alternative paradigm would require departing from a comparatively tried and tested approach founded on more than a century of practice, (Howe & Mitchell, 2011).  This is exacerbated by the lack of lifecycle operating data with many published examples of WSUD projects referencing performance over months and years rather than decades or its design life (Sharma et al., 2012). Hence, a risk averse climate created by inconsistent regulation, confusing governance arrangements and insufficient knowledge explains this reluctance to “break new ground” (Tjandraatmadja et al., 2008).

The previous example highlights the economic modelling of WSUD features often fail to capture long-term externality benefits such as resilience, environmental and broader system impacts in a way that is rigorous and reflects community values (Marlow et al., 2013). The decision reflected poor strategic vision as these plants have not been used to any great extent (McCallum & Boulot, 2015). This could also explain why water recycling schemes often seem economically unviable despite their ecosystem benefits (Sharma et al., 2012).

Dolnicar and Hurlimann (2009) highlight that WSUD implementation success depends largely on community acceptance due to their decentralised nature, whereby individuals need to participate with managing these assets. Issues in WSU developments[2] occur when community members have limited knowledge on managing/using these systems.

For instance, community perceptions and lack of support are cited as significant barriers to implementing recycled water schemes in Australia (McCallum & Boulot, 2015). Despite general acceptance of the need to conserve water through such initiatives, communities are hesitant to accept alternative water sources due to perceived health risks. Further, WSUD elements and their supposed higher economic burden are likely to only appeal to higher socio-economic groups (Sharma et al., 2012).

Research by Farrelly and Brown (2011) revealed the “need for flexible regulatory systems and institutional frameworks capable of anticipating, and keeping pace with, the changes required to achieve sustainable urban water management.” Similarly, Choi and McIlrath (2017) indicated that the WSUD policy framework could be improved by providing an “overarching State policy” and clear “mandatory framework” in place of current discretionary frameworks, ensuring decision-makers implement policy transparently and consistently.

Existing guidelines such as the BPEMG[3] and SPP[4] on water quality are considered too narrowly focused on water targets and not supportive of the full range of WSUD objectives (Choi & McIlrath, 2017). Policy control that encompasses all aspects of WSUD could be addressed through releasing universal guidelines.

Formal accreditation practices and approval processes in line with industry knowledge and standards can improve institutional capacity. Indeed, the development and accreditation of professionals with formal training was a significant step towards its WSUD institutionalisation in Singapore and may be suitable in the Australian context (T. Wong, 2011).

Economic models accounting for externalities will more equitably evaluate decentralised solutions.  Regulatory tools targeted at the built environment that can price urban development externalities have had a “demonstrable success in encouraging innovation in water sensitive service delivery” according to McCallum and Boulot (2015).

Appropriate policy and regulation to account for externalities include supporting financial mechanisms such as greater transfer and sharing of costs between all stakeholders associated with implementing WSU whilst a “public awareness programme” can help governments foster greater appreciation for their investment decisions (Groshinski & Clark, 2015). These aim to create economic incentives to innovate and encourage broader private sector participation.

Implementing stakeholder engagement and community consultation processes may encourage local ownership and commitment to proposed WSUD schemes (Sharma et al., 2012). Ongoing education of residents in the form of broader information sessions will increase their understanding and acceptance of WSUD features and encourage their appropriate use. Best practices for public engagement and community interaction should also be disseminated to developers.

Overcoming current regulation, frameworks and institutional arrangements aligned with incumbent technologies involves institutionalising WSUD approaches. Low political will and capacity is addressed by training, accreditation and continued use of experimentation and pilot studies. Externalities need to be quantified in order to develop economic models that incentivise investment and private sector participation. Community approval for WSUD application can be garnered through informing and empowering community members to participate in the decision-making processes in a meaningful way.

Sharma, A. K., Cook, S., Tjandraatmadja, G., & Gregory, A. (2012). Impediments and constraints in the uptake of water sensitive urban design measures in greenfield and infill developments. Water Science and Technology, 65(2), 340-352.

Environmental studies is a broad field of study that combines scientific principles, economics, humanities and social science in the study of human interactions with the environment with the aim of addressing complex environmental issues.

Risks and Impacts of Natural Disasters on Third World Countries

This study assessed the Socio-economic Impacts of Tropical Storm Erika on the people in St. Joseph, Coulibistrie village and their adaptation strategies The study used both quantitative and qualitati...

Literature Review: Impacts of Protected Areas on Livelihoods in Ghana

CHAPTER TWO LITERATURE REVIEW 2.1 Introduction Literature review is “the selection of available documents (both published and unpublished) on the topic, which contain information, ideas, data, and ...