“An idea whose time has come!”: What is the role of physical geography in a dynamic world experiencing unprecedented changes?

The origins of physical geography

The origins of physical geography can be traced back thousands of years, back to the time of civilisations such as Ancient Greece. Many thousands of years ago, the very origins of physical and human geography existed under the banner of ‘geography’. In the case of the ancient Greeks, they linked the concept of geography to the study of the landscape and other natural features in the surrounding environment (Agnew and Livingstone 2011). Furthermore, people in Ancient Greece were required to have a deeper understanding of their physical surrounds as they required geographical understanding as to where to build their homes, plot trade routes and when to plant their crops (Agnew and Livingstone 2011). Agnew and Livingstone (2011) suggest that geography in Ancient Greece was also characterised by the use of various inquiries used by ancient geographers. Ancient Greece is only one of the many civilisations throughout the ancient world who interacted with geography (Geary 2011). Over many centuries, the field of geography was expanded upon by various civilisations, particularly throughout the medieval period and early modern era (Geary 2011).

How physical geography has developed over time

To begin this paragraph, we must first examine the ‘formative era’ that began in roughly the mid-1920s and lasted until the end of World War Two (Aspinall 2010). According to Aspinall (2010) the theory of environmental determinism gave way to new approaches to the discipline. It is also mentioned that physical geography in the United States declined and it was instead argued that “geographers should not be engaged in explaining the origin, characteristics, and occurrence of landforms, soils, climate, and biota or their relations to one another” (Barrows 1923 as quoted in Aspinall 2010, 1051).

The post-war period of 1945-1970 brought further changes to the discipline of physical geography. The period after World War Two saw the “quantitative revolution in both geography and the earth sciences from the 1950s and 1960s onward gave new impetus and momentum to physical geography” (Gregory 2000 as cited in Aspinall 2010, p. 1052). Furthermore, this era examined how the various earth dynamics operated together and the establishment of a process approach to physical geography was also implemented (Aspinall 2010). The advances in technology, such as aerial photography “and systematic hydrological and geological surveying” allowed for physical geography to reach new heights as a discipline (Tadaki, Salmond et al. 2012, p. 552). Changes to climatology during this period included suggestions that it should use more mathematical and scientific laws towards its approaches and that meteorology had begun to become a dominant discipline into the study of the atmosphere (Tadaki, Salmond et al. 2012). Conversely, not all scientists and geographers were happy with the new direction of atmospheric research. Penman, who was a physicist and “president of the Royal Meteorological Society, deplored the over-mathematical abstractions of atmospheric research, arguing that ‘what should be the study of the physics of a real atmosphere overlying a real earth’” (Penman 1963, 453 as cited in Tadaki, Salmond et al. 2012, p.552). The development of human-environment geography continued through this period and was divided into two schools of thought, the Chicago school of thought that examined the relationship between humans and natural disasters, as well the Berkley or Sauerian schools of thought that examined the cultural impact on landscapes (Tadaki, Salmond et al. 2012).

Physical geography in the twenty first century – The future of physical Geography – where it is going and where it should be going – how and why?

The relevance of physical geography of the twenty first century will continue to be debated due to the ongoing debate regarding whether or not physical and human geography should ‘merge’, as well as the assessment of the relevance and impact of geographical research methodology. According to Newson (1992), the debate regarding whether or not both physical and human geography should merge in the future has existed since the 1970s. It is further suggested that “it seems timely to contemplate commonalties and differences among the subdisciplines of Geography. There is a general sense that this may be an opportune, if not critical, juncture in our disciplinary evolution” (Bauer 1999, 677). Aspinall (2010) suggests that the future of physical geography should be more integrative of all different disciplines within geography, as well as demonstrating a link between physical and human geography to explain the different aspects and processes of the world. Further to this, it is also suggested that the need for a further cooperation between physical and human geography is needed to ensure that the links between the actions and issues of the human population and issues of the physical environment can be linked and “provide an imperative to understand not only how environmental and human systems operate as a coupled system but also to understanding how they could operate” (Easterling 2007, quoted in Aspinall 2010, 1055). Of course, the theories of the future of physical geography are important to examine, however, we also need to understand the importance of future research methodology. A survey is needed to examine the various contemporary methodologies within the discipline of physical geography so that the impact of these methodologies on academic research can be examined, as well as allowing for a “a more relevant and sustainable Geography” (Bauer 1999, 678).

Are we entering the Anthropocene age?

It is clear that the earth is entering the Anthropocene age as a result of human interactions with the natural environment. The Anthropocene age can be defined “as one in which Earth’s form and functioning have become inextricably entangled with the workings of human societies” (Steffen et al., 2004, 2016; Waters et al., 2016 quoted in Ellis 2017, 525). The natural environment has been heavily impacted on by human activity, with such major examples including climate change, the continued acidification of the worlds’ oceans, land use changes around the world and the loss of various habitats and ecosystems (Johnson and Morehouse 2014). The impact of economics can be linked to the human impact on the environment, for example, natural resources such as coal, gold, tin and copper are extracted from mines to meet supply demands on the global markets, thus ensuring that in the case of mines, decisions regarding the environment are made in boardrooms (Johnson and Morehouse 2014).

So, what is the perception of this alleged new age among physical geographers? According to Ellis (2017), many physical geographers argue against the naming of a new age due to “embodying a profound misunderstanding of the socially differentiated, historically contingent, and deeply heterogeneous and unequal nature of human–environmental change – one that might produce more problems than solutions” (Castree, 2014; LeCain, 2015; Malm and Hornborg, 2014; Moore, 2016 quoted in Ellis 2017, 527). Furthermore, it also argued that the changes occurring throughout the earth are not as a result of all humans changing the environment, but different groups of humans “engaging in different social–environmental processes at different times with different consequences” (Ellis 2017, 527). Adding the Anthropocene age to the geological time line could cause criticisms from the geographical world to increase as a result (Ellis 2017). Conversely, Crumley, Laparidou et al. (2015) suggests that studies conducted by physical geographers, historians and human geographers can be combined to assist with our understanding of the alleged global entry into the Anthropocene age.

Bauer, B. O. (1999). “On Methodology in Physical Geography, Current Status, Implications, and Future Prospects.” Annals of the Association of American Geographers 89(4): 677-679.

Geography is a field of study that is focused on exploring different places and environments from around the world. Different aspects of Geography include countries, habitats, distribution of populations, the Earth's atmosphere, the environment, and more. 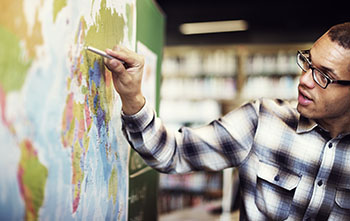 Spatio-temporal Variation in Rainfall-Runoff Erosivity Due to Climate Change in the Lower Niger Basin, West Africa

Spatio-temporal variation in rainfall-runoff erosivity resulting from changes in rainfall characteristics due to climate change could have severe consequences on soil and water....

Effect of Lime on Soil Strength

Organizational Culture and Social Capital in disaster response and recovery: A case study of 2015 Nepal Earthquake Introduction: Collaboration and network within the organization are crucial in the d...