Methods: ACDF cases (n=317,789 patients) were extracted from the National Inpatient Sample (NIS) between 1999 and 2011. Based on their Elixhauser-van Walraven score (VWR) score, patients were classified as low (VWR<5), moderate (5-14), or high-risk (>14) for surgery. The primary outcome was perioperative neurological complications, which were defined as events with potential central nervous system injury including spinal cord injury, cerebral hypoxia, cerebrospinal fluid leak, postoperative stroke, or any other unspecified nervous system complication. Secondary outcomes included in-house morbidity (hospital length of stay >14 days or discharge disposition to a location other than home) and in-hospital mortality.

Conclusion: Perioperative neurological complications are independent predictors of in-hospital morbidity and mortality after ACDF. Both morbidity and perioperative neurological complications have increased between 1999 and 2011, which may be due, in part, to increasing numbers of moderate and high-risk patients undergoing ACDF.

Anterior cervical discectomy and fusion (ACDF) is an effective and commonly utilized approach for the treatment of cervical radiculopathy and myelopathy.1,27 Between 1990-1999 approximately 540,000 ACDFs were performed in the United States,1 and this figure appears to be increasing in recent years.27 Clinical and radiographic outcomes are generally favorable in most patients,2,20,24 with an estimated mortality and morbidity of 0.1% and 19%, respectively.10 Intraoperative and immediate postoperative complications most commonly include dural tear (3.7%),5,8 airway compromise due to edema or hematoma (1.7-6.0%),5,8,9,22 and epidural hematomas (0.2-1.9%).5,8

Perioperative neurological complications, including myelopathic (0.2-0.9%)5,8,13,26 and non-myelopathic injury (0.2-3.2%),3,5,14,26 are devastating and can result from vascular insult, distraction, and direct mechanical compression of the spinal cord and nerve roots.15,27 These injuries are particularly unfortunate because they can often be monitored and prevented with the use of intraoperative neurophysiologic monitoring techniques, such as transcranial motor and somatosensory evoked potentials.17,28 Patients who experience iatrogenic neurological injuries may sustain adverse effects that range from transient numbness or paresthesias to irreversible paralysis.23

Our previous analyses provided information regarding the national incidence and trends of perioperative neurological complications over time following spinal fusion surgery, however several questions remain unanswered.6 For instance, given the high volume of ACDFs and the increasing incidence of perioperative neurological deficits, it seems pertinent to understand why certain patients sustain complications after ACDFs, while others do not. Prior literature has suggested that patients with previous myelopathy, cervical kyphosis, spinal cord atrophy, spinal instability, and fractures through long, fused spinal segments may be particularly susceptible to spinal cord injury.5 Strategies such as maintaining intraoperative systolic blood pressure greater than 80 mmHg and avoidance of excessive extension and distraction of the cervical spine during positioning may further protect against neural injury.5 Data assessment utilizing a large nationwide population-based cohort may allow for broader and more sophisticated multivariate analyses to understand the relative contribution of risk factors such as demographics, patient comorbidity load, and other perioperative events on the incidence of neurological deficits.

Thus, the primary aim of this study was to describe and quantify factors associated with perioperative neurological complications after ACDF. Secondarily, we aim to measure the clinical impact, namely morbidity and mortality, of patients sustaining these deficits after ACDF surgery. Understanding patient-specific risk factors for and clinical sequelae of neurological complications may help to further facilitate the safety of ACDF surgery through improved preoperative screening, intraoperative monitoring, and postoperative management protocols.

The National Inpatient Sample (NIS) Database, which is indexed by ICD-9 (International Classification of Diseases) billing codes for patient diagnoses and procedures, was obtained from the Healthcare Cost and Utilization Project. The database samples from 95% of all hospitals nationwide and contains about 7 million total hospital admissions from across 44 states. Furthermore, the NIS database contains patients of all payer types, including Medicare, Medicaid, private insurance, and uninsured.

Cases were extracted from the NIS between 1999 and 2011 using the ICDF-9 code for ACDF (81.02). We collected baseline patient characteristics including age, gender, and admission type. Patient comorbidity load was evaluated using the Elixhauser-van Walraven score (VWR), which is calculated from common diagnoses that are associated with in-house mortality.29 Patients were classified as low- (VWR<5), moderate- (5-14), or high-risk (>14) based on their VWR score. Of note, patients with trauma (800-897.7, 733.1-733.19) were excluded to eliminate cases with preoperative neurological injuries.

The primary outcome was perioperative neurological complications, which were defined as events with potential central nervous system injury including spinal cord injury without spinal bone injury, cerebral hypoxia, cerebrospinal fluid leak, postoperative stroke, or any other unspecified nervous system complication (ICD-9 952.0-952.09, 952.1-952.19, 997.0-997.09). Secondary outcomes included in-house morbidity and in-hospital mortality. Morbidity was defined as hospital length of stay greater than 14 days or discharge disposition to a location other than home.

A total of 317,789 patients were included in this study. Mean age was 51.7 (95% CI, 51.5-51.9) years. The majority of patients were between 65-74 years old (61%), were stratified as low-risk VWR (93%), and presented on an elective basis (90%). The most common comorbidities were hypertension (35%), chronic pulmonary disease (13%), and uncomplicated diabetes (11%). The rate of in-hospital morbidity and mortality after ACDF was 8.4% and 0.1%, respectively. The total rate of perioperative neurological complications was 0.4%. Other notable postoperative complications included myocardial infarction (2%), dysphagia (1%), bleeding (1%), intraspinal abscess (0.2%), and hoarseness (0.1%). Detailed patient characteristics and postoperative complications are presented in Table 1.

We observed that perioperative neurological complications, although rare, are significantly associated with increased in-hospital morbidity and mortality. We were unable to discern the direct cause of morbidity or mortality following a new postoperative deficit; however, it is reasonable to assume that perioperative neurological complications propagate downstream complications that prolong length of stay and increase the risk of mortality. For instance, patients with intraoperative recurrent laryngeal nerve injury are at increased risk for aspiration pneumonia, which could precipitate an extended hospital course and possibly death. Patients that harbor spinal cord or nerve root injuries are increasingly immobile and can develop DVTs and/or PE as a result.

Given the impact of perioperative neurological complications on patient outcomes, patients should be carefully risk stratified and medically optimized preoperatively to decrease the rate of neural injury. Our study demonstrated that moderate and high-risk VWR as well as obesity were independent risk factors for the development of perioperative neurological complications. Furthermore, our data suggest that over the past 12 years, surgeons have been accepting an increasing number of high-risk patients for ACDF surgery. These patients may benefit from prehabilitation exercise regimens aimed at managing modifiable risk factors and improving cardiovascular and respiratory conditioning.4 Granted, many high-risk patients must undergo surgery on an emergent basis, and in these cases, careful preoperative risk stratification and optimization may be more difficult.

Intraoperative neuromonitoring (IONM) techniques such as SSEPs (somatosensory evoked potentials) and MEPs (motor evoked potentials) can be instrumental in detecting neurological insults in the operating theatre, which can prompt surgical corrective action. Studies on the diagnostic accuracy of intraoperative neuromonitoring during cervical spine surgery have shown that SSEPs are highly specific (96-100%), while MEPs are both sensitive (100%) and specific (96-98%) for new postoperative neurological deficits.16,30 Furthermore, the use of SSEPs has been shown to minimize neurological injuries during cervical spine surgery. In a single-surgeon series of 809 patients, Roh et al. estimates that SSEP monitoring prevented new postoperative neurological deficits in 1.9% of patients.21

However, IONM for cervical spine surgery is still not universally accepted among surgeons. Some feel that it is not worth utilizing due to the low incidence of perioperative neurological deficits.25 Other authors report suboptimal sensitivity when using SSEPs as a standalone method, which subsequently fails to inform surgical decision-making.11,18,25 We feel that although the incidence of perioperative neurological deficits is low, given the risk for devastating consequences such as quadriplegia, the benefits of neuromonitoring outweigh its shortcomings. Furthermore, the accuracy of IONM is only fully realized when using multimodal monitoring including EMGs (electromyography), SSEPs, and MEPs to provide a global assessment of cord and nerve root function.16,30

Our study is limited by several methodological factors. Primarily we were limited by the use of an administrative database, which is based on insurance claims data. Although large and offers a national perspective, this data can often be inaccurate, is subject to reporting bias, and does not provide detailed information regarding a patient’s hospital stay. For instance, information such as the use of IONM, indications for the procedure (radiculopathy, myelopathy, etc.), or radiographic findings, which may have influenced postoperative outcomes, are not available through the NIS database. Additionally, our study only contains short-term hospital outcomes and thus, does not delineate the transiency of neurological deficits or provide information on postoperative functional status.

Future studies should focus on further developing techniques for monitoring and preventing perioperative neurological deficits. From a pathophysiological standpoint, animal studies are needed in order to accurately model iatrogenic neural injuries so that potential treatments can be developed. We recently developed a model of iatrogenic spinal cord injury in rats and validated the use of SSEPs and MEPs in predicting neurological injury.27 Such a model could be useful in further optimizing IONM parameters and alarm criteria for predicting intraoperative neural injury. Furthermore, real-time simulation in the laboratory of iatrogenic perioperative neurological complications under IONM offers the ability to develop and trial potential therapies under experimental conditions. Neuroprotective techniques such as hypothermia and steroid use have been described in the traumatic spinal cord injury literature,7,12 but similar paradigms have not been employed intraoperatively for iatrogenic injury. Further study on IONM techniques as well as development of pharmacologic agents for intraoperative use will help to minimize the risk of perioperative neurological deficits, thus improving the safety and efficacy of spine surgery.

Figure 1. (A) Proportions of low, medium, and high-risk patients undergoing ACDF and (B) prevalence of mortality, morbidity, and Perioperative neurological complications after ACDF from 1999-2011. 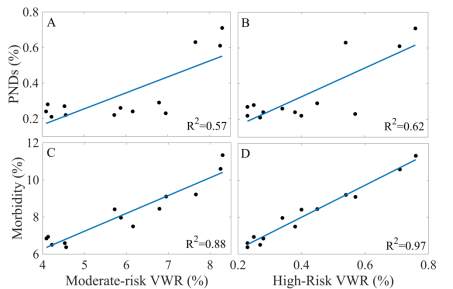 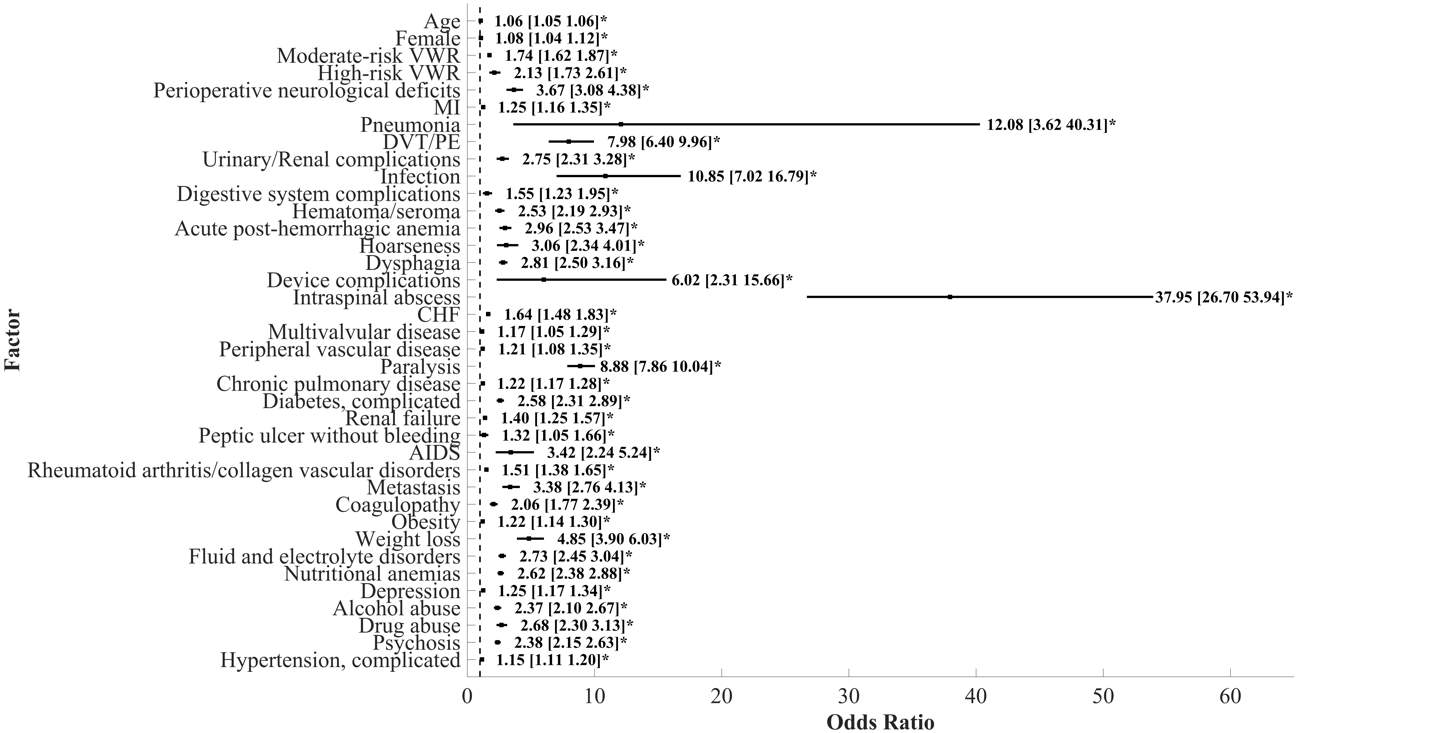 Figure 3. Predictors of morbidity after ACDF with OR and 95% CI. Asterisk (*) indicates OR that does not cross dashed line (OR=1) and is statistically significant. 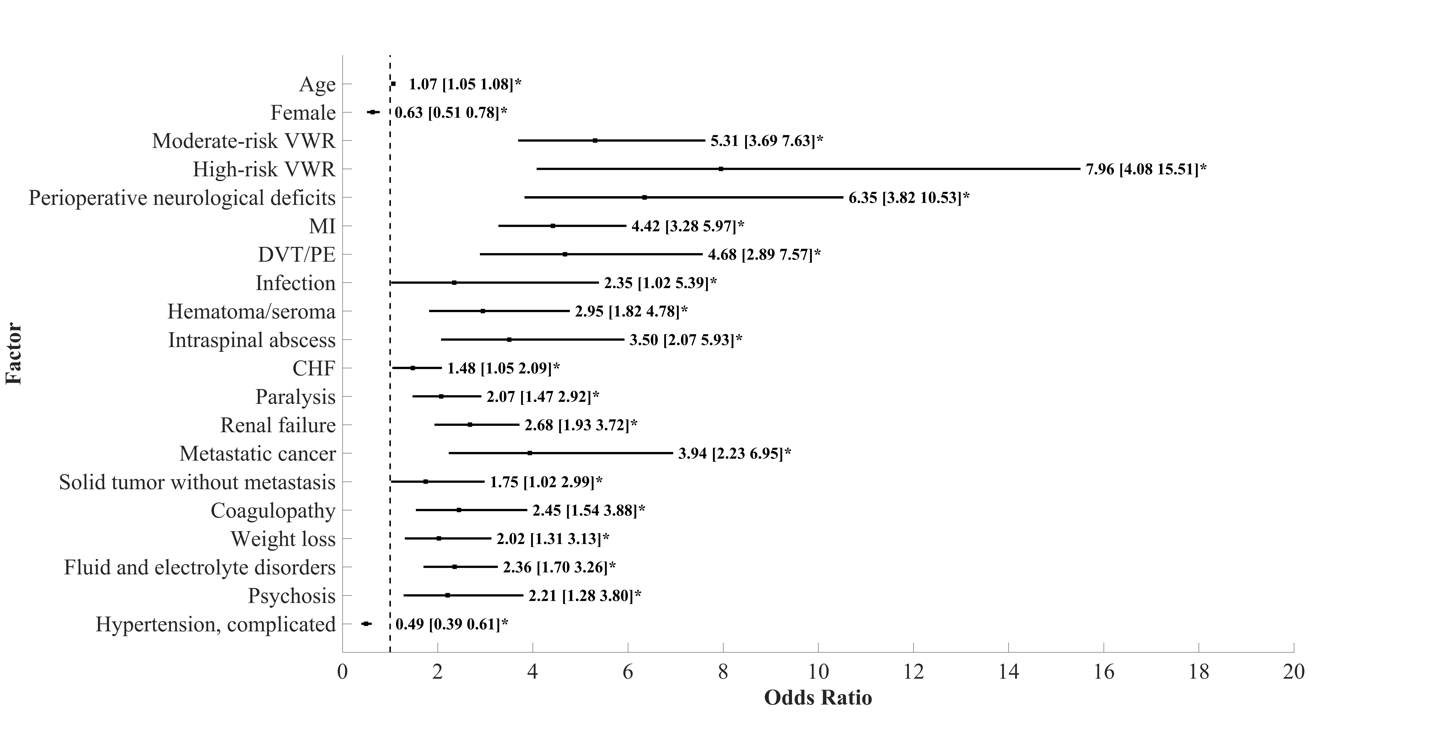 Figure 4. Predictors of mortality after ACDF with OR and 95% CI. Asterisk (*) indicates OR that does not cross dashed line (OR=1) and is statistically significant. 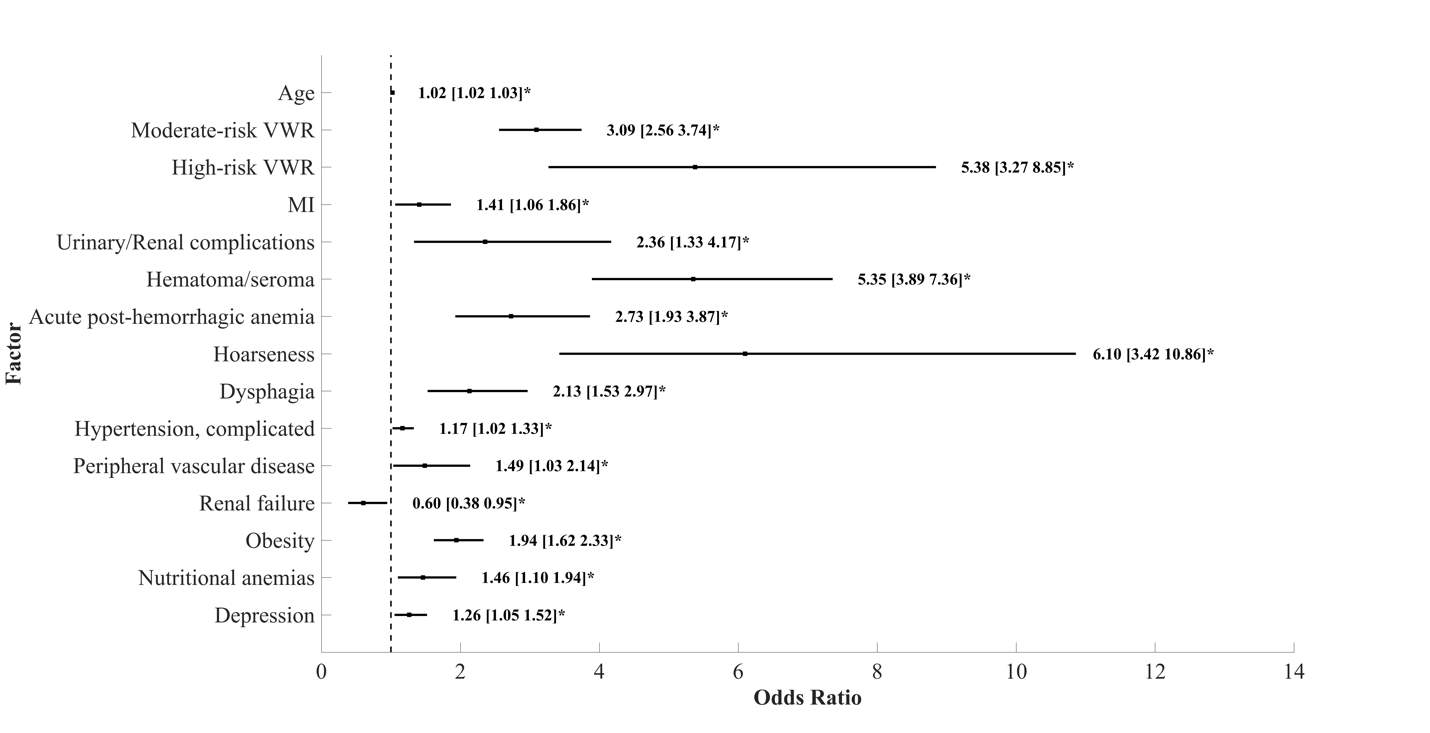 Figure 5. Predictors of Perioperative neurological complications after ACDF with OR and 95% CI. Asterisk (*) indicates OR that does not cross dashed line (OR=1) and is statistically significant.

Neurology is the specialist branch of medicine that deals with the treatment of disorders of the nervous system. This means that neurologists concern themselves with issues affecting the brain, the nerves, and the spinal cord. Higher brain function relies on proper development of the cerebral cortex, including correct positioning of neurons and dendrite morphology....

Do Psychopaths Have Abnormal Brains?

The aim of this article is to review the research on the neurodevelopment of psychopaths in order understand the biology behind psychopathy a bit clearer....

The Cognitive Neuroscience of Learning and Application in Corporate Training

This literature review will examine the current research on the neuroscience of memory formation and its potential application to transfer of learning in a corporate setting....