In the past, in the UK has been provided multiple publications by SCI, through technical information issued by material and product suppliers and by specialist software the regulation on the design of structural elements in multi-storey steel framed buildings in relation to BS 5950 Structural use of steel frame. Some in the UK Standards, part of BS 5950, have been replaced by the Structural Euro codes in 2010. The Euro codes are coordinated design standards that are appropriate and oriented to limited national alterations, throughout the European Union. That doesn’t mean structures designed according to the Euro code will be significantly heavier or lighter compared to the structures designed based on BS 5950 but only detailed rules do differ. SCI publication P334 Design of multi-storey braced frames was published in 2004. Other than numerous publications giving regulation about the design of structural elements and connections, this publication have given a guidance on the particular aspect of the strength of braced frames. Following up a publication was made to replace the P334, for design in accordance with the Euro codes. Its purpose was similar to that of P334 but, at the time of publications was not updated in accordance with the Euro codes. Those publications are still generally important and the references to them have been retained but designers will need to consider carefully the use of regulation provided in relation to BS 5950 when designing to the Euro codes. There is a continuing programme to update the design regulation in line with the Euro codes. (BROWN, 2004)

This dissertation is subject to a Comparison of braced and unbraced frames in steel structures evaluated through the British standard BS5950 and Euro code EC3.

Nowadays, Steel structure is the most prevailing material in the construction industry. (Mahmood Md. Tahir BSc, 1997)

The main advantages of steel Frame are:

Structural stiffness can be increased in Steel moment resisting frames by introducing steel bracings. There are different types of steel bracings, such as cross bracing ‘X’, diagonal bracing

Steel frames without bracing, failure will generally occurs at beam and column connections. They have lateral stability by flexure and shear force in beams and columns i.e. by frame action. Under severe lateral loading, ductile fracture appears at beams and columns connections. Unbraced frames have low elastic stiffness. P-Δ effect is a problem associated with such structures. So, to increase the structure stability to lateral loading and good ductility fractures to perform well under seismic loading, bracings system can be provided. Hence, allow the structure to obtain a great lateral stiffness with minimal added weight and to ensure that the displacement demand of a building is to be kept below its limited displacement. The bracings are installed in the columns along the perimeter.

In this dissertation the lateral stability of steel buildings under braced and unbraced system is investigated. A Six story building is analysed for lateral loading (wind load). A simple computer based modelling in Strand7, Robot Software is performed for Equivalent static analysis, stability spectrum analysis. The stiffness of different types of bracing frames has been examined. Steel bracing is used to minimize the displacement demand. Bracing can either be installed from inside the frame or outside of the system.

Generally, a braced frame provides an efficient lateral stability of at least five times stiffened than the frame itself. Bracing system reduces the horizontal displacement by at least 80%. To meet this requirement, the stiffness of the two systems (unbraced frames and braced frames) have to be compared and the following relationship has to be satisfied: Kb ≥ 5Ka where Ka and Kb are lateral stiffness spring constant for unbraced and braced frame respectively. The bracing frame is a system to transfer the factored loads down to the foundations. (Mahmood Md. Tahir BSc, 1997) 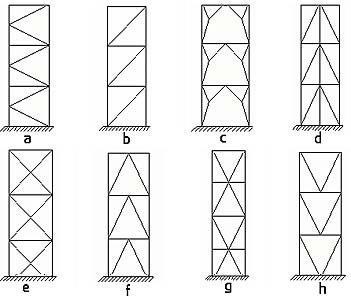 Unbraced. In practice frames are braced against horizontal displacements to simplify the behaviour and to avoid as much as possible bending action about the minor axes of the column. Unbraced frames also known as “sway” frames in which need to be accounted a secondary moment action the “P-Δ effect. (Mahmood Md. Tahir BSc, 1997) 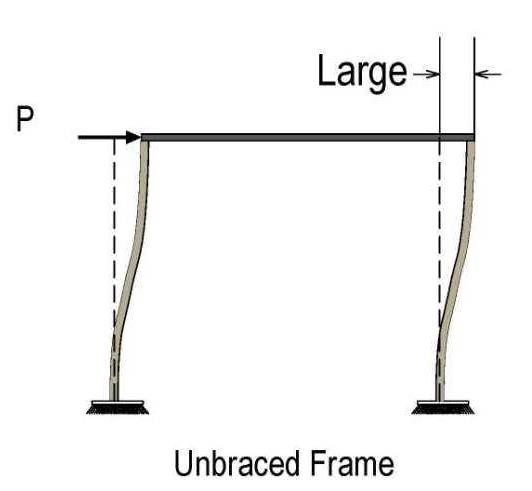 A brace must be designed to satisfy two things:

Other problem encountered in this study is the following:

Given the number of stories, bays, and dimensions of a braced and an unbraced multi-storey frame, and the working loads which the frame must carry together with appropriate load factors; find suitable distributions of bending moment, shear force and axial force throughout the frame for appropriate load combinations. A prime concern in multi-story frame design is the sway (or the physiological response to sway acceleration and vibration) induced by wind at the working load level. (D G BROWN BEng, 2009)

The objective of this dissertation is to evaluate the stiffness of different type braced and unbraced frame of a multi-storey structure subjected to lateral loads and to identify the suitable bracing system to resist lateral load efficiently.

1.7 Scope of the present study

In this dissertation a present study is taken by modelling of different steel frame under the analysis mentioned above using Strand7 software, robot software and hand calculation. Then results obtained are compared. Conclusions are based on the tables and graphs obtained.

A design of multi-storey is carried out with braced steel frame buildings up to about 6 storeys, where the beam-to-column connections are assumed to be pinned connections and the horizontal loads effect is prevented by a system of vertical bracing, in the other hand an unbraced steel frame building of 6 stories is implemented, whereas the beam-to-column connection is assumed as a rigid.

The dissertation briefly reviews the overall design basis, according to the Structural Euro codes and British-standard and gives advice on the actions (mainly vertical loads) that this type of building should be designed to resist. It covers the design of the vertical bracing system, which, as well as providing resistance to lateral forces caused by wind, provides stiffness against horizontal sway. The stability is a key factor in determining the resistance of the frame to second order effects. The requirements, in relation to the Euro codes and the UK Building Regulations, are discussed.

Introduction to a dissertation investigating the lateral stability of steel buildings under braced and unbraced systems. A Six story building is analysed for lateral loading (wind load)....

The main contribution of this Project is to supply a distributed timeserving routing policy with congestion diversity (D-ORCD), the congestion info is integrated with the distributed shortest path computations....

Landscape, Mobility and the Non-Representational: A Critical Discussion of their Intersections

Landscape, Mobility and the Non-Representational: A Critical Discussion of their Intersections Over the past two decades the social sciences have experienced a theoretical turn towards understanding...